The Top Three Dangerous Ransomwares You Need to Know About

Once in a while a virtual bomb rips through the Internet and creates damage that costs millions of dollars. The scary part is that the latest threats in the cyber world can do far more than simply steal passwords or bank information. A new breed of malware called ransomware can actually hold victims’ information hostage, in a digital sense. Ransomware is designed to lock up files and hold them hostage, demanding that victims pay money to get them back. Victims will watch helplessly as files on their screens are encrypted, or they may return to their computers to find that they cannot access their files without an encryption code. Their screen may display a ransom note demanding money in exchange for access to the encrypted files. It is hard to put a price on the damage that is done by a data hostage situation. Criminals could charge anywhere from a few hundred dollars to a few thousand dollars to regain access to stolen files. Of course, the personal information or trade secrets contained in stolen files could be invaluable. This type of attack puts reputations on the line because of the sensitive information that can be stolen. And even if victims decide not to pay the ransom, they still need to consider the cost of all the hours it would take to recreate the data that was stolen. 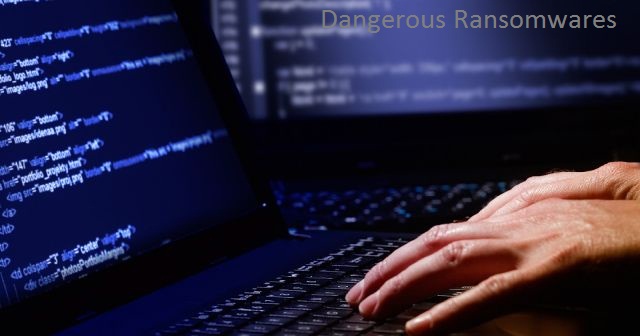 The Top Ransomware Threats Today One of the most high-profile examples of ransomware of all time is TeslaCrypt/CryptXXX. It is important to note that a program like this doesn’t just attack single users. Even large enterprises can be left without important digital resources once they are targeted by this powerful hack. In fact, NASCAR chiefs were left with no other option than to pay ransom fees when race car data was seized right before the NASCAR Spring World Cup Series. Team officials watched as file after file was encrypted during the attack. IT staff members and outside consultants were unable to stop what was happening. Faced with an estimate that it would take 1,500 hours to recreate all the data that was stolen, team leaders decided to fork over the money to the thieves. Authorities warn against actually paying ransom fees for attacks of this nature because there is no guarantee that the criminals will hold to their end of the bargain.

The threats don’t stop with that one strain of ransomware. A ransomware program called CryptoWall also ranks among the top three threats out there. This ransomware program attacks its victim through phishing emails containing malicious links or infected files. After a victim clicks the link or downloads the file, the ransomware then holds a victim’s hard drive hostage. According to the Internet Crime Complaint Center, ransoms can range from a couple hundred dollars to ten thousand dollars.

Another ransomware program that is hitting the general public hard is Locky. This powerful threat uses more sophisticated techniques in macro functions in Excel and Word files to gain access to victims’ data.  It only starts encrypting files after it reports to the command and control center – so victims who may have downloaded a ransomware infected file might not lose their data if they disconnect from the internet before the malware can communicate to its control center. Less fortunate victims will receive a message with instructions regarding how to send payment in exchange for a decryption code that can unlock those files.

How to Stay Ahead of Ransomware Attacks Nobody is immune to ransomware attacks. A recent report from Kaspersky Lab shows that the number of users who encountered ransomware in 2016 increased by more than 500 percent from the previous year. The scary part is that any individual who is attacked can put an entire enterprise at risk if they are connected to the system network or logged in as an administrator. In addition, these dangerous programs are morphing. The only way an enterprise can keep up is to have ironclad internet security software in place. Malware protection needs to be customizable, intuitive and fast in order to prevent and identify attacks. It is essential for enterprises of any type to seek out advanced malware that is designed to prevent file encryption in the event of an attack. The fact of the matter is that an enterprise really can’t be prepared enough when it comes to keeping data protected in the face of ever-evolving, clever ransomware attacks. The time to anticipate the sophistication of tomorrow’s ransomware technology is now.