Mohandas Pai, the former CFO of Infosys, this week lashed Executive Vice-Chairman Vishal Sikka for holding co-founder N R Narayana Murthy responsible for the disaster in the firm to disguise his awful performance. “Yes, true. Sikka needed to leave since February by his own consent. He is disguising his own breakdown to reach the goal by holding Narayana Murthy responsible,” he claimed to the media in an e-mail interview. 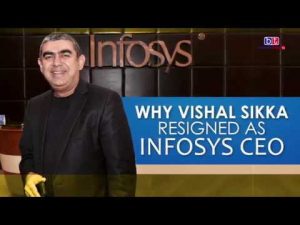 He claimed this in a reply to a query if Sikka put the whole blame on Murthy to disguise his awful performance. The resignation of Sikka has dropped Infosys into disaster with the firm encountering various problems, comprising an appropriate substitute as CEO. Sikka had resigned subsequent to months of bitterness with Murthy, mentioning personal and malicious attacks on him, although he did not blame Murthy for his resignation.

The panel of the company worth USD 10 Billion held Sikka responsible for nonstop attack via already-disproved and factually inaccurate rumors for the unexpected resignation in spite of strong support from the panel. Answering to a query, Pai claimed that appointment of Sikka as Executive Vice Chairman of Infosys is a governance problem. This had generated a puzzling lineup, with the company already having of a Co-Chairman (Ravi Venkatesan) and a Chairman (R Seshasayee). “Yes, the firm has a Co-Chair, a Chair, an acting CEO, and an executive Co-Chair. A very puzzling lineup,” he further claimed.

In addition to this, shareholders make decision on directors, even though panel appoints them, but they are not THE authority. “Stakeholders make decision of who will be directors. In fact, panel hires them, but they are not the final power,” he claimed. Asked whether the current CEO should be from outside or inside the firm, Pai claimed, “A person who values culture of the company and is not a self-proclaimed overconfident reformer is perfect.”