HomeNewsNew Safety Features For Commuters To Be Added To The Shuttl App-Based...
News

For ride-sharing services, their passengers’ safety has been the prime concern. And a 2-year-old startup may have worked out a system that is apt to handle this concern. Here, we are talking about, Shuttl, the bus-sharing service that has announced an array of features that are claimed to make certain that passengers are secure at all times. The company said it will be releasing these emergency features soon to over 450 buses that are a segment of its network.

One of the features, known as SOS, enables the passengers to ring the alarm. Also, there is a physical panic button mounted adjacent to the front door. A process will be initiated in any such actions that will initially slow down the bus and then finally stop it at the closest bus stop, according to the company executives. Another feature added is the CCTV live feed that can be shared by the passenger with their family and friends. The URL link will allow them to see a present footage of the travel. 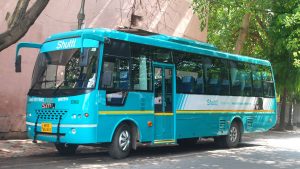 The startup, for now, is functional in the National Capital Region only, is also including an alcohol detector to warrant that driver, while any of the rides, have not consumed alcohol. Failing to do so will stop them from starting the transit, and if they drink while driving, the bus will shut down at the succeeding bus stop. Every bus will now have the authority to validate commuters by seeing their faces. The passenger is asked by the Shuttl app to upload their image, against which their face is matched. It is an optional facet that can be used for rapid check-in.

Apart from this, the passengers can also utilize the audio system known as “Chirp.” On tapping the chirp button in the app after entering the bus will transmit a unique signal that can be sensed by the driver’s phone and used for confirming the identity of the passenger. Additionally, there is a feature, “homecheck,” which on enabling will permit the company to observe the passenger’s GPS coordinates minutes after they leave the transit, to confirm they have reached their place. In case, they don’t reach in time to their place, they will get a computer-generated call to know their well-being and whereabouts.

Besides these releases, the startup also declared an infotainment system, Shuttl TV, which enables passengers to select a movie to watch from a list. The movie will be displayed on the screen mounted close to the door and commuters will have to plug in their headphones for sound to their own phones.

We do appreciate the work of Shuttl while keeping their passengers’ safety their priority. Hope all the features function in accordance after their launch.