The United States and many other countries spend a lot of money funding their military. Although some of the stipulated and approved budgets take care of the welfare of military men and women, a sizable amount also goes into the procurement and logistics of military apparatus.

This is very important for the country as the involvement of the military helps implement the country’s foreign policy. For instance, funding the military has been the reason why the nation has made its mark in Afghanistan, Iraq, and several other places.

If you are interested in details on how the United States funds the military, you can check the Pentagon’s request of over 600 billion dollars in 2019 by visiting: https://www.militarytimes.com/news/your-marine-corps/2018/02/12/pentagon-2019-budget-heres-what-the-military-wants-to-buy/

Considering the amount spent on the procurement of parts needed by the military, you should be aware that many players and materials are involved. For instance, the army, naval force, air force, coast guard, and many others are in the picture.

This is aside from the manufacturers of these materials and agencies that help in logistics and stocking. As a matter of fact, some of these materials are also purchased and used by airlines and organizations outside of the military. The point is that many people and things are involved.

The NSN came into being to help make the process a lot simpler. We will discuss the concept of NSN especially as it relates to information technology parts in this article. We advise everyone (especially those in the military and systems that rely on these NSN numbered parts) to keep reading. 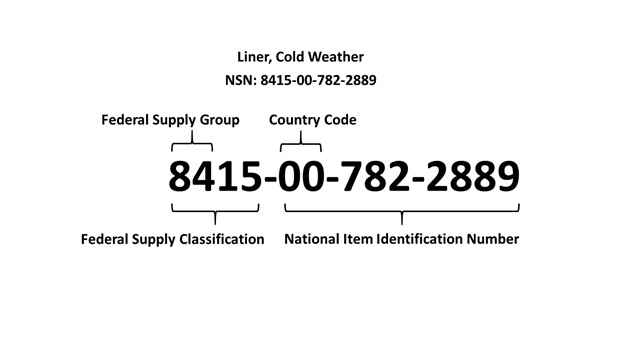 The NSN is an official label on the various parts that are purchased, stored, issued, or stocked in the inventory of the Department of Defense. This well-organized classification and identification system consist of 13 digits.

The NSN is the acronym for National Stock Number. There are also instances when it is used interchangeably with NATO Stock Number. This is because there are countries besides the United States involved with the NATO treaty and manufacture of the parts that the NSN helps to properly classify and identify.

The digits are in various segments as they tell the type of part, down to the uniqueness of the part. For instance, the first 2 – 4 digits of the NSN assigned number tell a lot about the kind of part in question.

So, military ammunitions such as guns will have the first 4 numbers entirely different from computer hardware and software items. While guns and some other ammunition have their NSN numbers start with 1005, most information technology parts start with numbers ranging from 7010 – 7050.

The History of the NSN

Understanding the history behind the National/NATO Stock Number is a good way to understand how this inventory system works. To this end, you should know that this classification and identification system by the United States Department of Defense started after the Second World War.

The essence was to come up with an inventory system that makes the procurement, stocking, issuing, and storing of parts less complicated. This is especially because all military agencies and some other industries were involved.

Some of the agencies involved include the army, marines, navy, air force, and commercial aviation industries. All these agencies procure, stock, issue, and store a lot of items for various reasons.

The concept of the NSN is to have a centralized classification and identification numbering system that is easy to reckon with. More importantly, something that will resolve the complications of the supply chain system.

However, you should know that the whole thing did not start as NSN. Rather, it was referred to as the FSN (Federal Stock Number). This item classification and identification system did a whole lot but had a shortcoming. This is the reason it had to evolve into what is now known as the NSN.

The failing of the FSN was the lack of a digit code for nations or the origin of the items. This was a fundamental problem that needed to be addressed because the United States is not the only party involved in the use of this code.

Other nations that are part of the NATO treaty and some others make use of this inventory system. The major difference was the introduction of 2 additional digits to represent the origin of the product. This allows knowing the source of the item.

This is although the inventory system is strategically organized by the Defense Logistics Agency which is under the Department of Defense. You can read this for more on the history of the NSN.

The National Stock Number also known as the NATO Stock Numbers consists of 13 digits. These digits help identify the class and uniqueness of products, materials, parts, and items generally used by various agencies. The explanation of the digits are as follows:

The first 4 digits are closely related but have a slight difference. The first 2 are called the FSG which stands for Federal Supply Group. They help identify the class of items. For instance, Information Technology Parts are 70, Aircraft Accessories and Components are 16, while Abrasive and Hardware are 53.

The 5th and 6th Digits

The 5th and 6th help identify where the item was manufactured. Considering that many of the items are manufactured all over the United States, you should know that the “00”, as well as “01” are assigned to such items.

You can tell the uniqueness of an item by checking the last 9 digits of the NSN. Aside from the first 2 that tell the country, it was manufactured in; other numbers are unique to the item.

The last 9 digits are known as the National Item Identification Number. So, we advise anyone that has anything to do with information technology parts NSN to understand how the last 9 digits tell of the uniqueness of the parts.

The NSN inventory system has gone a long way in helping to classify and identify parts used in various agencies. It has helped the supply chain process, and this includes dealings involving Information Technology Parts. We have gone over some subjects revolving around this inventory system in this article and hope that this information helps.