Anushka Sharma and Virat Kohli Announce Their Wedding In Italy

The prominent Ae Dil Hai Mushkil lead actress Anushka Sharma and the captain of the Indian Cricketer Team Virat Kohli got married in a secret manner but in a Hindu tradition way. The duo secretly landed at the tranquil resort in Tuscany followed by the Mehendi celebration. Without involving the outside world, the wedding ceremony was followed on the very next day, i.e., Monday at Borgo Finocchieto resort in Buonconvento, a beautiful town in Siena province in Italy. The adorable couple after the marriage made it official by posting their endearing pictures on Twitter. 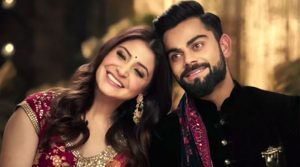 An official Twitter account of Anushka stated, “Today we have promised each other to be bound in love forever. We are truly blessed to share the news with you. This beautiful day will be made more special with the love and support of our family of fans & well-wishers. Thank you for being such an important part of our journey.” The same was posted on the twitter account of Virat Kohli.

Sabyasachi dedicatedly worked on the designer wears for the bride and groom’s special day and made the couple look stunning. On the wedding day, Anushka wore a pale pink lehenga with the intricate crafting of gold and silver embroidery while Virat complimenting her in a vintage pattern and embroidered silk sherwani. Sabyasachi also designed exclusive lehenga for the Mehendi ceremony that made the bride look simple yet elegant in the bright blend of colors like orange, pink and teal.

The duo has planned two grant reception for their industry and cricket buddies from which one will be hosted at Delhi, the homeland of Virat on December 21. The second will be hosted in Mumbai for the rest of the friends on December 26. The couple has decided to stay in their Worli apartment in Mumbai while planning to celebrate their New Year and to play a series in South Africa, whereas after the New Year’s eve, Anushka will return to Mumbai and work on her professional commitments, which include a film with Katrina and Shah Rukh Khan.