Adobe Flash Player was one of the most used flash players which helps you to view all types of multimedia content on your PC. It allows you to stream video, Audio, Flash Games including some Rich Internet Applications (RIA). RIA’s are web applications that are designed to run on a web browser and don’t need any specific software installations. Adobe Flash Player used to be all–in–one player on PC. 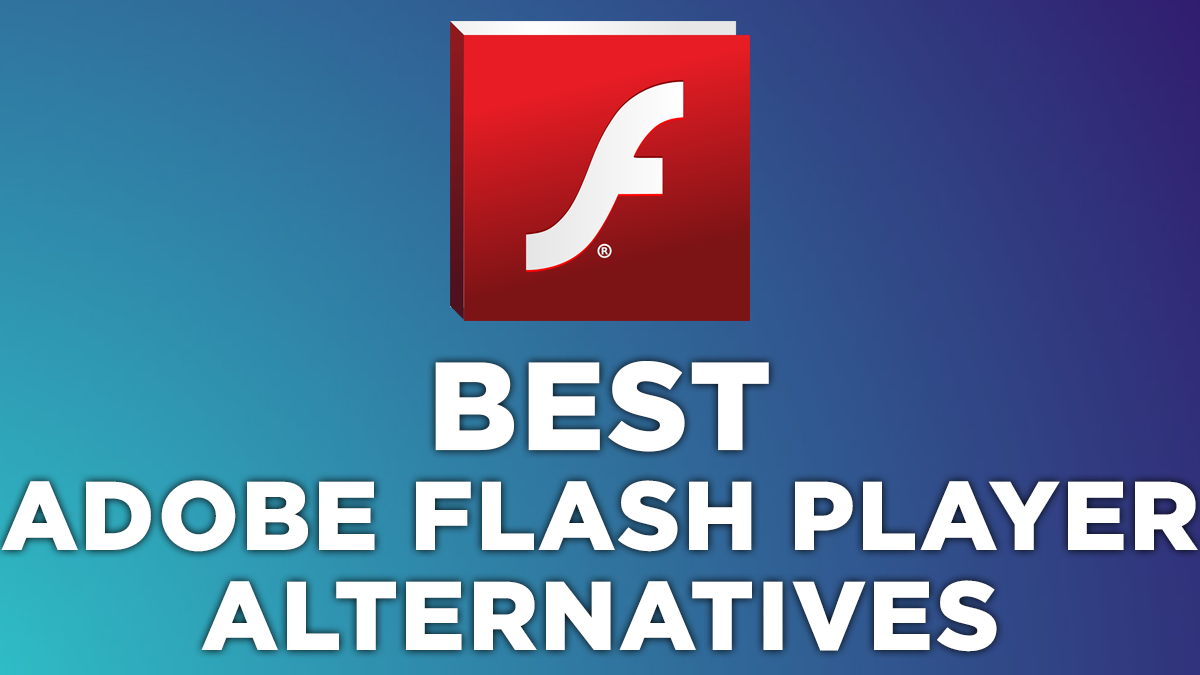 Since 31st December 2020, Adobe has stopped supporting Adobe Flash Player as it has previously announced in the year 2017. So, in this article, we are going to introduce the 5 best alternatives of Adobe Flash Player which you can use to play multimedia on your PC.

SuperNova is one of the best and simple alternatives to Adobe Flash Player. It allows you to play .swf files in a new separate window of a browser. 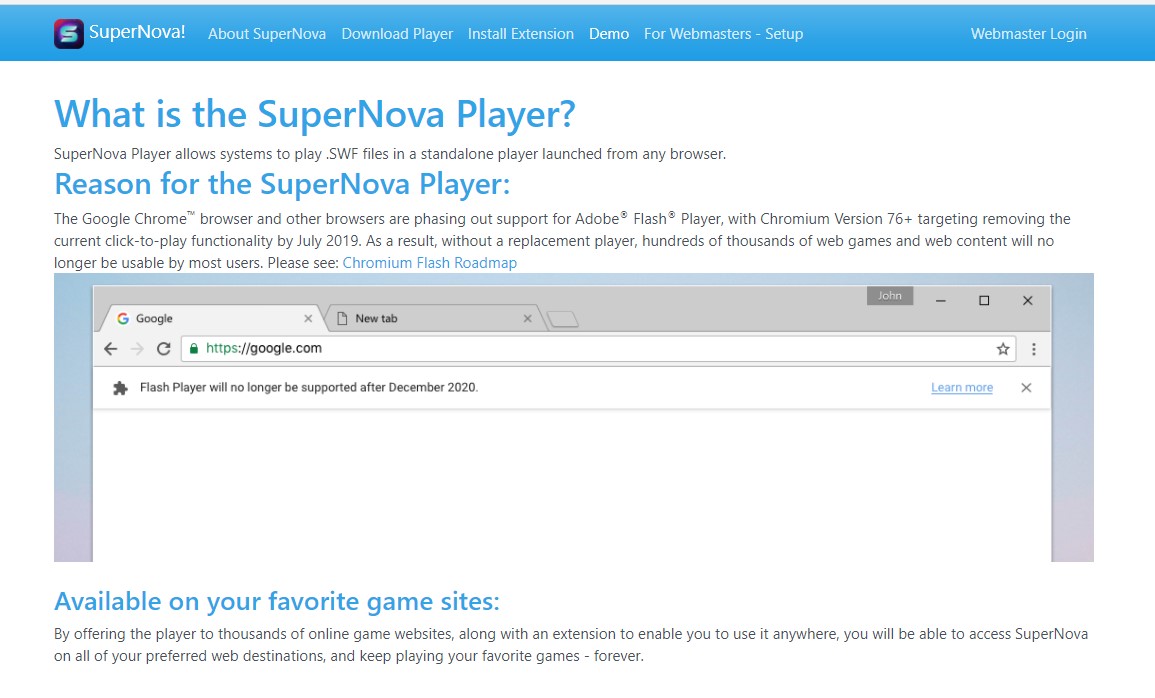 SuperNova website has a pretty simple and straightforward user interface that helps you to Download the software or install Extension. You can download and install the software for free or if you don’t want to allocate separate space for the app on PC, you just add App Extension on the browser you use. SuperNova is supported on most browsers.

BlueMaxima’s Flashpoint is non-profit software that aims to preserve web games. It was launched in 2018 with an aim to preserve the experience of all platforms that exist on the web, even after their End of Life (EOL) on the web. It has successfully stored more than 1, 00,000 games and 10,000 animations respectively since 2018 running on 35 various platforms. Adobe Flash Player is one of the major platforms making up a significant portion of it.

You can use two versions of BlueMaxima’s Flashpoint: The one that can be hosted on the web or the installed version on PC.

Size of the software is 766GB during download, and 874GB when extracted. So, before you proceed to download the software, make sure you have enough space on your PC. Otherwise, the entire performance of your PC might get affected.

Note: Flashpoint Ultimate is not available in the US region. If you are living in the US, you might have to try other flash player alternatives.

This is a lightweight alternative to Flashpoint Infinite with the size of 715MB when downloaded and 3GB when extracted. It functions similar to Ultimate with limited quality.

BlueMaxima Software is available on Windows, Mac, and Linux. It supports several multimedia formats and the software gets regular updates to improve functioning and remove bugs.

Ruffle is supported on all Operating systems Windows, Mac, and Linux including Android and iOS. Ruffle is an open-source project which allows many developers to develop the software.

Shubus viewer is an exclusive utility tool within multiple functionalities, it helps you to create texts, HTML Pages, and also to view pictures and play games. It allows you to play all types of multimedia just like Adobe Flash Player. It is available for free with no in-app purchases involved. It has a friendly user interface and is supported on Windows OS. The application is light in weight and doesn’t affect your system performance. It can also be integrated with most of the popular browsers conveniently.

Lightspark is an open Project on Github written and developed using C++ coding language. Since it is an ongoing open project, the developers keep releasing updates regularly to support other Flash APIs to make it similar to Adobe Flash Player.

Light Spark is available on both Windows and Linux Operating systems. If you are a developer and would like to contribute to the application development, you are allowed to customize the source code to add other functionality. You can do it by visiting the Lightspark page on Github. 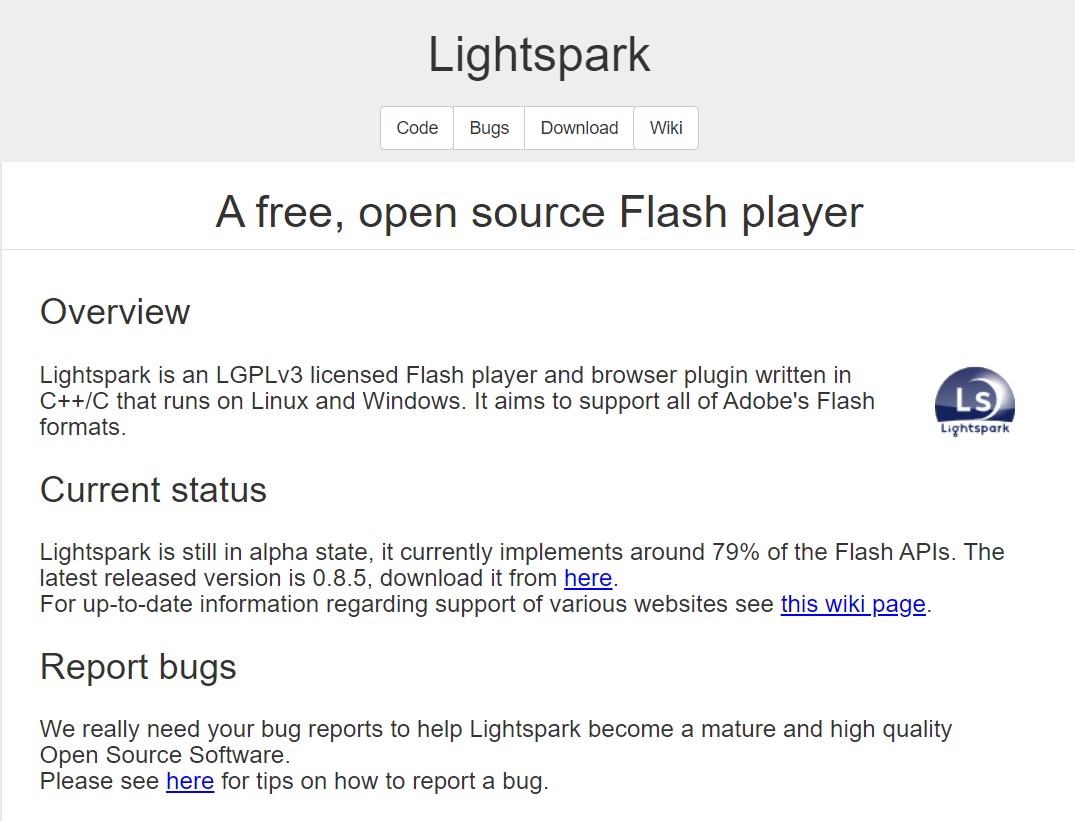 HTML 5 is one of the most popular and best alternatives of Adobe Flash Player. In a real sense, HTML 5 is the true successor to Adobe flash player. HTML 5 players are better than Adobe Flash in many aspects such as compatibility, customization. They are affordable and easy to download and use. There are many HTML 5 players available for free to download.

VPlayed, Kaltura, JWPlayer, VideoJS are some of the most popular HTML players.

Well! This is the wholesome list of Adobe Flash players.

Since 2005, Adobe has been the most popular tool to play multimedia. In 2013, Adobe had 400 million users with more than 100 million desktop users. It was compatible with Windows, MAC, and Linux OS. Adobe has supported all types of Data formats and multimedia formats. All these features make Adobe flash player a one-stop destination to play any multimedia on PC. But eventually, many security vulnerability threats had been identified which impacted battery performance of the system and led to more power consumption in mobile.

So, Adobe has announced the EOL (End of Life) of the application form on 31 December 2020. It has previously announced the EOL in July 2017. Adobe has explained the reason to decide EOL of the application is Open standards such as HTML5, WebGL, and WebAssembly have matured over the years and they are now ready to serve as reliable alternatives for Flash content. Also, major browser vendors are integrating these open standards into their browsers and deprecating most other plug-ins (like Flash Player).  By providing more than three years’ advance notice, Adobe believes that it has announced EOL in prior to 3 years so there could have been sufficient time for developers, businesses, and other parties to migrate Flash content to new standards. ‘

I believe this article helped you to know the best alternatives to Adobe Flash Player. So, do try them and let us give you feedback in the comment section.