Why Do We Love TikTok so Much?

Every now and then there’s a new social network that focuses on something new: first, we had Facebook that was focused on creating and maintaining a long-distance friendship, then we had Twitter to share opinions and views but in a predetermined number of characters, then Instagram that revolves around photography.

TikTok as the Latest Evolution of Social Networking Focus

It’s always the point of social networks to connect people and make new friendships and strengthen old ones. The only thing that changes is the way they do it. Of course, this is also assisted by the technology that’s constantly advancing, and thus, it enables new ways of expression – we started with the text, then the photo was in the trend and now the videos are coming. TikTok is a social network dedicated to this format – video.

And just as Facebook became the platform to which a huge army of Myspace (the first social media to gain immense popularity) members migrated, those who started having fun on Vine, as the premiere platform that focused on short and viral videos, have moved to TikTok who became the second most downloaded app in 2019, only behind WhatsApp according to research from Betway. 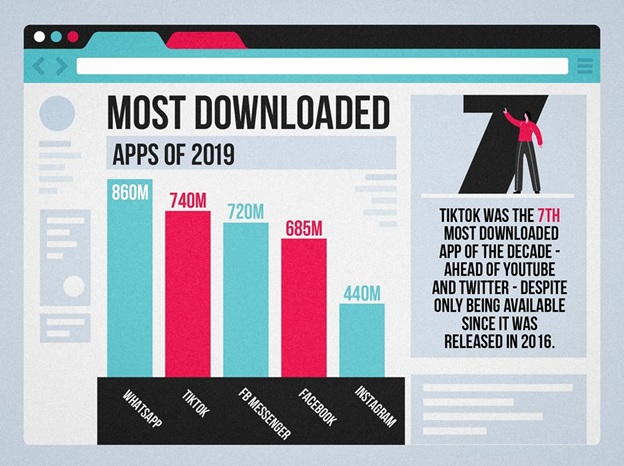 Unlike YouTube, here short video clips shot on the mobile are placed, the editing of which takes place within the application itself. You can either upload the audio you want to use or simply use one of those already set up in the application. In addition to simply adding audio, it can be easily manipulated with funny frame shots, adding various effects and all the while enhancing the video, making it funnier and… “dumber”.

TikTok is definitely not the place to come across politics, sports or world news, except perhaps in the form of a meme. In fact, if we were to describe this social network, we’d probably use that description – meme. A place where you can post things that you certainly wouldn’t put on Facebook for everyone to see, or even on Instagram. With such a variety of content, TikTok has become an excellent place for companies to promote their brands. Some have even started utilizing influencer marketing on TikTok. Browsing through the for you page, you can find many relatable products presented in an honest and authentic setting.

So far, Snapchat has been a safe place and still is, but TikTok has a lot more features than Snapchat, and one of them is – to become famous. Unlike Snapchat, TikTok has an interesting algorithm to build your feed. Unlike other social media, videos with more views or likes aren’t favored here.

The chances of having a video of someone with 6 followers and someone with 16,000 followers popping up on your feed are the same, which is great news. That’s why, if you want to get famous, TikTok is your best chance. Unlike YouTube, where there are several big influencers and rarely one can break through, here with a couple of viral videos you can become a new sensation.

However, this doesn’t mean that the TikTok network is reserved only for those who want to create and express themselves. No. Even without opening your own account, you can freely browse other people’s posts and have a good laugh.

The fact that many celebrities have also opened their accounts – from Ariana Grande and Khloe Kardashian to Vanessa Hudgens and Zara Larsson, is indicative of TikTok being something that won’t disappear. Whoever you think of, chances are they have their TikTok account, too. Not everyone is equally active, but they don’t have to be.

When you get a good idea for a video, you don’t have to do it for likes or reviews, but just to laugh. If you manage to make yourself laugh, then you probably will make everyone else, and that’s the most important thing – to spread the positive story. And that’s why we like TikTok!