What Kind of Smart Band is More Attractive to Users

With the continuous progress of technology, people choose more and more kinds of electronic equipment. As a wearable smart device, the smart band has a limited audience in the past. Many people believe that smart brands are only used when exercising. But most smart bands have functions such as detecting the physical condition. The addition of these new functions makes smart bands begin to attract more users. HONOR smart band is popular with users because of its focus on identity, sports, health.

Let’s take the latest HONOR Band 5 as an example to explain what kind of smart band is more attractive to customers. 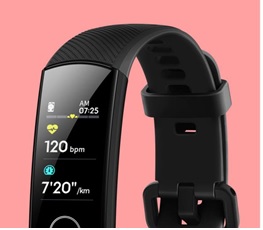 First of all, HONOR Band 5 has accurate GPS motion track records. For users who like outdoor sports, it is such a boon. It can record your exercise track and your own exercise state regularly.

Third, HONOR Band 5 can monitor the physical condition in real time. In the process of exercise, many people do not know what kind of physical condition they have. And they do a series of high-intensity exercises, which might lead to the destruction of the body system.

The smart band monitors whether the user’s body functions are normal through a motion sensor. And then transmits it to the mobile phone through Bluetooth, without providing people reasonable exercise suggestions.

Fourth, HONOR Band 5 has portable remote camera function. Everyone knows that mobile phones have the function of taking photos. But the only drawback is that people can only use the selfie stick when taking pictures themselves, and the composition and picture are not very good. Connect the mobile phone to the smart band and put the mobile phone in the distance, so that the user can take photos as he wishes. It can be one of the best Christmas gift for your man.

Fifth, HONOR Band 5 can monitor the occurrence of chronic diseases. This kind of band is mainly used in hospitals. It transmits the detected data to the doctor, who will diagnose and treat the patient by learning the data on a regular basis. The elderly and people with high incidence of chronic diseases are the main beneficiaries.

Sixth, HONOR Band 5 can provide remote song cutting function. After being busy every day, people come home to lie in bed and want to listen to a song to relax. At this time, they can use HONOR Band 5 to connect to the music device and switch at any time.

Seventh, HONOR Band 5 can provide the function of finding band. In the anti-loss function, users only need to click on the APP to find band. Within a certain range, the band will vibrate, and the reminder light will flash, so users can quickly find the lost smart band.

In fact, in a word, useful and cost-effective for users is the most popular band. HONOR accomplishes the above two points. Now, the latest HONOR Band 5 for sale in UK for only £29.99, which is definitely worth buying.