If you are a big fan of third party apps and tweaks, Cydia must be on the scope as the best third party app installer. But been restricted only to the iOS jailbreak users, not everyone can install Cydia right in the moment. So what will you do, just give up? Not at all, as you find various Cydia Alternative packing a number of Cydia features being available through all the iOS versions. 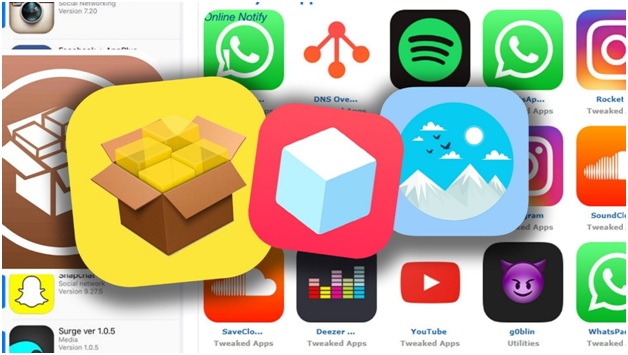 What are the advantages of having Cydia Alternatives?

Cydia plays a big role on iPhone, iPad or iPod after iOS jailbreak being the exclusive third party installer. It packs a number of useful apps, themes, tweaks, mods and etc that you cannot get with no jailbreak. But thanks to Cydia Alternatives, you can now have some of the Cydia featureson your iOS device with no jailbreak. Before moving to the best Cydia Alternatives options, let us see what the benefits arehaving them with you.

What are the Best Cydia Alternatives?

The best Cydia replacement for iOS is Sileo which also supports only after jailbreak iOS. Just like Cydia installer, here you can get a plenty of apps and tweaks together with many more downloads. While this requires the device to be jailbroken first, the below recommendations are given for non-jailbroken devices.

AppValley is considered a direct source of apps and downloads as based in the US. In fact, it is home to thousands of apps, games, and more including a range of emulators. And with its supporting interface, anyone can use the app installer with no any complication.

As one of the newer Cydia Alternatives, Panda Helper is winning the user attention nowadays. It offers both free and premium options to choose as per the requirement of the user. And with the free version itself you get access through plenty of app options, tweaks, mods and many more.

Emus4U is another leading third party app installer that supports with a wide range of emulators together with unofficial apps and tweaks. The app comes in a supporting frame with support to all iOS firmware and devices.

TweakBox is another popular third-party app installer you can have with plenty of useful content within it. The app features four different categories to easily reach the user with particular requirement. So TweakBox is considered one of the feature-packed installer for iOS you can install and remove so easily.

As one of the original Cydia Alternatives, Tutu App is winning all attention from the users worldwide supporting a wide range of apps, themes, tweaks and many more downloads.  Making the app available for more users worldwide, it is available in a number of language options. It receives updates with respectively the timely requirements and the best device compatibility.

If you find any trouble with AppValley, TweakBox or similar most popular installers, you may try this new CokernutX App Installer. It comes with minimum restrictions and hosts thousands of popular downloads worldwide

iOSEmus is similar to Emus4U in its work frame and available as another trustable Cydia alternative. The app allows easy installation of any third-party unofficial content for free with no complications.

This is about an add-on application for users with jailbreak permission while AppCake cannot directly categorize as an alternative to Cydia. When you are with Cydia or Sileo app, there is no barrier to install further third-party apps, tweaks and everything.

Asterix Installer is another all-new app store that released for those who are excited about free applications and games without an Apple ID.

iPA4iOS is not one of the well-known installations for it is a newly released one. But there is a wide range of collections that you can find out trending and loved apps easily.

This is one of the perfect alternatives to Cydia which capable to offer a heap of installable applications in an ideal manner.

TopStore App is a great app that will never let you return to any other app store. Of course, there is a vast selection of tweaks, themes, unofficial apps, screen recorders plus more. There is no doubt that you can pick up things that are better than from the official app store. And the best part is users without jailbreak permission as well welcome to set up TopStore App and enjoy deals.

AppEven is a popular application for those individuals who are looking for games emulators. Throughout, you are capable to play console games on your iPhone or iPad. Moreover, there is a huge collection of unofficial tweaks and apps which are top rated ones.

FTiOS Store is one of the famous releases of developers in Vietnam. Users can search thousands of games and apps which stand as an exclusive deal for Apple iOS.

HipStore as well an app store from Vietnam and that is an all-inclusive offer. There are various games, apps, themes, tweaks and everything that you wish to apply on your beloved iDevice. And you will never encounter those wonderful deals through the official Apple app store.

Since not many users do not know that they are capable to apply similar apps to Cydia tweaks, and various jailbreak apps, this would be an interesting narration to realize what are the exact places that you can surf for installing such amazing ones with or without jailbreak. If you are with iOS 13 to iOS 13.2 which are categorized to versions that do not have a jailbreak tool at the moment, try out these and enjoy unofficial apps with a few clicks. As rumors and predictions say, users with iOS 13 and later will be able to collect Cydia and Sileo in the future. But until then, you can play with these alternatives.

There may be more than this as alternatives to Cydia that we could not mention. But there is no doubt that this list of CydiaAlternatives gave you some from the top rated ones to enjoy. If you are not a jailbreak user but excite about features behind Cydia, let one of these Cydia alternatives to customize your beloved iPhone, iPod Touch or iPad.