HomeNewsSmart Textile That Can Detect And Neutralize Nerve Gas
News

Smart Textile That Can Detect And Neutralize Nerve Gas

Smart technology is what the researchers are currently eyeing so as to include it in today’s world. Recently, the scientist Teresa J. Bandosz from the City College of New York lab has developed a smart textile so as to quickly detect and neutralize the nerve gas. The development of the smart textile can prove to be a groundbreaking strategy in order to prevent the spreading of chemical warfare agents. 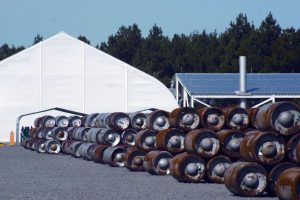 According to the scientist, the use of fabric to develop the smart technology is like exploring a new avenue altogether. The fabric used is made up of cotton that has been modified using Cu-BTC MOF or oxidized graphitic carbon nitride composites. The developed cotton fabric was firstly tested as a nerve agent detoxification media and colorimetric indicator. The lab-developed smart textile is what the researchers are planning to further explore so as to enhance its application.

The smart textiles quality can be changed by using different components. For instance, when g-C3N4-ox and Cu-BTC are combined the resulting product is a nanocomposite that is MOFgCNox with an excellent heterogeneous porosity and chemistry. When the MOFgCNox are deposited on the cotton fabric, a stable and supreme quality fabric with great photocatalytic detoxification capability is created. This fabric can act as a detoxifier for the nerve gas replacement dimethyl chlorophosphate.

The smart textile when checked for its efficiency proved to absorb the chemical warfare agents and result in the detoxification products. The reason for such a superior performance was related to the high dispersion rate of the MOF crystals that are present on the fabric. Also, the special texture of the fabric helps promote the availability of the active copper (Cu) centers.

This new smart fabric neutralizes the nerve gas. Thus, the smart textile can act as a knight in the shining armor in the chemical warfare and help save the environment as well as the public from the health hazards.