Earlier this year, YouTube had rolled out its in-app messaging features in Canada and now, it is all set to make it available globally. The introduction of this new feature will enable video sharing by the user with their family and friends within the app and, above all, have conversations over them. Usually, majority of users, in order to talk over a video, share it via a link from YouTube on other social media platforms. But with this move, it is clear that the company intends to keep its users on the platform and converse everything about it right there. 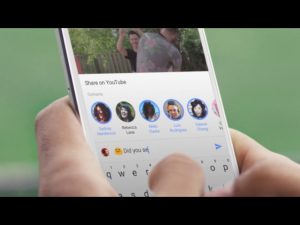 Since last year, the firm had been validating the new feature; and now after, making adjustments & improvements based on the feedback of users, it is finally all set to be launched to users all across the world. In a blog post, the company said, “Now onwards, you can share videos directly with your family and friends on the YouTube platform itself. Not only can you receive and share videos in the app, but also discuss them on YouTube itself, invite others to the discussion, revert with another video, and more.”

In order to use the new in-app messaging features, all that a user has to do is click the Share button, and then select to share it with their YouTube friends from the contact list on their phone. A direct link is provided to invite contact; the user can also add individuals directly as contacts via the app, and even friends can be included in the existing discussion. Users do not need to worry if they still want to stick to their prior method of sharing as that too will exist after the roll out of the new feature.

In YouTube’s app, the new tab “Shared” will show the user previously shared videos and even those shared with them, together with any discussions you have around them. Even the user can manage their contacts here and create the aforementioned direct link to invite users.

The company further said, “All these shared videos are placed in a brand new tab on the YouTube mobile app, which makes it simpler than ever to catch up on your friends’ shared videos or to show them some of your own favorites.” The feature will be available via the updated iOS and Android apps.

So, update your app, start sharing and discussing them in the app itself. Let us know your views about this new feature.