Reliance Jio has created a new free JioPhone for just Rs 1500 with a refundable option. The public queries regarding the phone still remain unanswered. The phones OS system details have also not been revealed. The basic question arises in one’s mind is about the app accessibility or support on the new Jio VoLTE feature phone.

At the RIL AGM, the company has revealed that the JioPhone will support only the Jio-based apps such as Jio Music, JioTV, Jio Cinema, Jio news, Jio Money, and others. The social or utility apps will also be provided on the phones by the telecom provider. Here comes the question—Will the phone be supporting other competing apps or only Jio-based apps? As per the sources, the JioPhone has the Firefox OS installed in the new phones. Also, the user can download apps available on the Jio App Store itself that blocks the subscribers from accessing other apps. The company basically wants to keep a tight hold on what the users are going to download in order to keep away online threat. 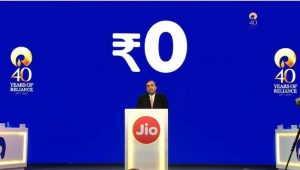 The Reliance Jio’s Jio App Store will have all the social, payment, and content verticals present in it. Hence, the users do not have to rely on the other apps. The JioPhone user is restricted to accessibility owing to its own software platform and refund feature. The answer to the question “Can the company churn the market?” is doubtful. However, this is something only the time can decide. The basic problem in the phone is the pre-installed apps. This is kind of like the violation of the Net Neutrality principles. The Jio users are restricted to the Reliance own app ecosystem and leaving the subscribers no option of using other services or apps. The competition with the other apps is increased as well due to the other app shadowing.

Additionally, the Jio subscribers have to use only the Jio SIM on a mandatory basis along with restriction on the app access. This results in the creation of discriminatory tariffs for content and data. The proof regarding the violation or non-violation of the Net Neutrality is still a matter that can be concluded after the launch of the JioPhone. So let’s wait and watch till the smart JioPhone will be out.

Reliance Jio has to still answer against the violation issue pointed at it. This situation is similar to one created after the Facebook’s Free Basics service was launched in India.