HomeBusinessHow An Entrepreneur Can Be Distinguished From a Businessman?
Business

How An Entrepreneur Can Be Distinguished From a Businessman?

An entrepreneur is an individual who has the guts to take risks because they believe that the bigger the risk, the higher the return. They think about new creative ideas and work on them. They engage in new ventures without fear because they aim to see the big picture. 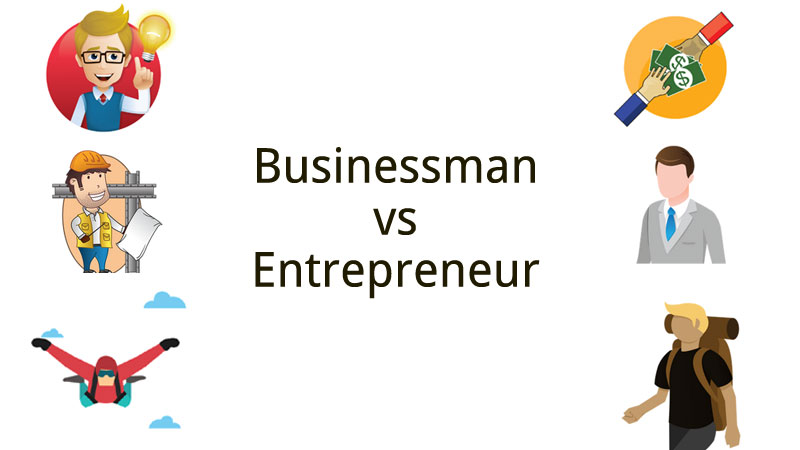 On the other hand, a businessman is an individual who also thinks about starting a business but rarely thinks about new ideas. Instead, they focus on old ideas and try to implement a few modifications. They are not as creative as entrepreneurs because they fear losing.

If you want to be successful in the market place, you have to take risks otherwise, you won’t get far. The more you brainstorm, the more ideas you get. And one of these new ideas may even be good enough to replace your old product.

Here are some major differences between an entrepreneur and a businessman.

There is a clear difference between an entrepreneur and a businessman when it comes to market position. An entrepreneur is a kind of initiator who doesn’t follow anyone’s path. Instead, they design their own way to establish their place in the market. As far as a businessman is concerned, they usually walk on a path designed by an entrepreneur. So, we can say entrepreneurs lead the market while businessmen are considered industry players.

An entrepreneur is intuitive in nature; they are not calculated. They believe in their qualities and with help of their experience and confidence, they take dangerous steps business-wise. On the other hand, a businessman applies analytical thinking when taking each step. Firstly, he considers feasibility and calculates the costs associated with an idea. We can say that they are a conventional thinker while an entrepreneur believes in creativity.

An entrepreneur is a person who is focused on people. They come up with ideas that best suit people’s needs or the latest requirements. They take risks without immediately thinking about the return. They start a new venture with the intention of creating something extraordinary for society while a businessman thinks in a different way. They work on an already existing market. They keep an eye on profit or return. They want to invest in an industry whose demand is already at a peak so that they may get a higher rate of return.

Both work on different theories. An entrepreneur works on a long run spectrum; they don’t focus on immediate benefits. They invite outsiders and believe in discovering their own playground. They believe in creating their own bequest while a businessman thinks on the short run spectrum. They merely step in a market that is already established and brings profit.

A businessman focuses on a holistic approach meaning that they don’t focus on a specific element but consider everything as a whole. This approach makes sure that your business is at its full aptitude. On the other hand, an entrepreneur follows an atomistic approach. They focus on all individual and separate elements. They believe little drops of water make a mighty ocean.

Both are inversely proportional to each other. Where there is more competition, there is less risk and vice versa. A businessman faces high competition and, therefore, the risk is low as the market is already established. More and more people are working and predicting profits.

As far as an entrepreneur is concerned, they face low competition because they tend to work on a different path that not many people have the guts to step in. They explore new grounds and the risk is high, but undoubtedly, the returns are higher as well.

In order to start a new idea, an entrepreneur accepts unconventional and practical procedures. They don’t compel their team to follow traditional approaches. They give them a chance to share their experiences about new procedures and then reach a conclusions. A businessman does the opposite. They follow traditional and conventional theories and impose them on people working under them. They do not accept change. They don’t involve their team in the decision-making process.

Nobody can give guarantee your plan A will work. You may encounter many difficulties on the road. A businessman never designs a backup plan. Instead, they have a resolution committee that discusses every difficulty that arises. But an entrepreneur, in his goal-setting theory, makes a plan B just in case. They buy necessary insurances or pre–settlement loans and find alternate ideas to switch to in case their plan doesn’t work out. In the above-mentioned cases, alternatives may help out even financially.

No doubt, differences may arise due to nature or way of thinking but both entrepreneurs and businessmen are energetic and motivated towards their goals. Both either directly or indirectly provide benefits to society and the economy. Both walk with broader vision but reach their destination with distinct mindsets.