India is known as a lucrative market for automakers and HMSI (Honda Motorcycle & Scooter India) is one of the leading manufacturers in two wheeler segment. The automaker has now opened its fourth assembly line in its Narsapura plant, Bangalore. 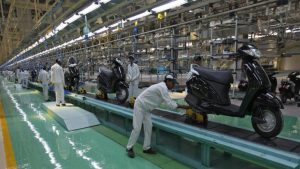 Aoyama, who in the past headed Honda’s Indian operation, while talking about the 60% contribution of Asia region through sales and India’s role in driving the growth said, “Honda operates in more than 120 nations in terms of two wheeler segment and among those, India dominates in its growth charts respective to demand. India became the top driver of Honda in 2016–17 by contributing with 28% of two-wheeler sales. The drastically growing Indian two-wheeler market is very crucial for Honda in terms of future-based growth. However, in order to meet the energetic market demand and to stay geared up for future prospects, Honda has started its fourth assembly line in Karnataka, and with this, the Narsapura plant will manufacture 24 Lakh units annually. Owing to plant capability of producing this bulk quantity, the Narsapura facility is termed as the largest production plant of Honda and also the leading production base around the globe.”

Featuring the company’s growth trails and the trend of rising demand for scooters in the Indian market, Kato, HMSI’s chief said, “ In Q1 of FY 2017–18 HMSI’s insistent growth led the trade thrust. Emerging at twice over the pace of industry at 19%, Honda single-handedly contributed 68% to sector new capacity, resulting, gain of 3% market share gain. While dominating the scooter segment in India with a market share of 59%, the automaker now also ranks second in the listing of India’s top motorcycle brand. The most recent growth additionally strengthens Honda’s capability to increase annual manufacturing capacity to 6.4 Million units from all plants to serve the market demand faster. In the coming years, the country’s strategic and balanced investments will head towards our goals to formulate India as a global export hub.”