Guide on How To Setting up a Chess Board

Articles about chess can be found anywhere, either online or hard copy; however they usually go straight to chess lingo: openings, gambits or Sicilian. Chess writers sometimes assume that an amateur already even knows how to do the basic things before even playing: setup chess board. 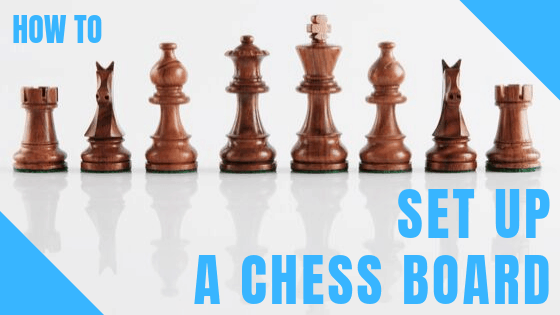 Setup chess board is a basic rule of chess that every beginner needs to get know. Before we get into how to set up chess board a little bit of the chess basics is provided as you read on.

One player plays with the white pieces, and the other one plays with the black pieces. Each player has sixteen pieces at the start of the game: a king, a queen (not called queen), two rooks, two bishops, two knights, and eight pawns.

In addition to the pieces, we need a board. The chess board has 64 squares: eight rows and eight columns. The board is always placed with a white square to the right.

Columns have names, from left to right, a, b, c, d, e, f, g, h. Therefore, all cells are defined with a letter and a number, for example, the box in the lower-left corner (of the blank) is called “a1”.

Each player has 8 pawns at the beginning of the chess game. The pawns have the lowest value on the board. It is not a real drama if you lose one of the pawns during a game.

Each player also has 4 minor pieces at the start of the game: two knights and two bishops each. Knights (these usually look like a horse) and bishops are worth around 3 pawns. Also, each player has two rooks (with a castle tower shape) that are more valuable pieces, which are worth 5 pawns.

The Queen is the second most valuable piece on the chessboard. Each player has a queen that is extremely powerful and is worth 9 pawns. Do you see how important she is? She is worth more than all the pawns you own.

However, the most important piece is the king (traditional piece design carries a cross on the top)! During the entire game, always be aware of its safety; otherwise, you will lose.

The main objective in the game of chess is to checkmate the king. Therefore, while attacking your opponent’s king, yours should always be in a safe place protected by the other pieces. The value of your king cannot be counted in pawns, because these would be endless.

Now, in order to properly set up chess board you must do the following. First place the rooks in the corners, starting from the outside to the centre, then the knights, then the bishops, and finally the queen and king. The queen goes in the square of her colour.

In a classic chessboard configuration, place the two horses next to the towers, in the same row. Place the bishops next to the knights. Place the Queen on the central square that has the same colour, next to a bishop. Therefore, the white Queen belongs to a white square and the black Queen belongs to a black square. Finally, place the tall and precious King in the remaining square of the first and eighth rows. Place the eight pawns on the second and seventh ranks, so that they sit opposite all the other pieces as a protective wall.

Now your chessboard is arranged correctly. This long explanation might look like a lot of work to organize your chess board but once you become familiar with the process it becomes muscle memory… and of course brain… to play and win.