Human beings, depending on their sleep habits, can be categorized into early birds or night owls. Whether you are the former or the latter doesn’t depend on your preferences, but your habits and to some extent, your genes. Going to bed early and getting up early in the morning is considered a healthy sleeping habit.

You may choose to be an early bird and try to get up early every day. However, if your habits don’t fall into place, you may find it difficult to stick to the habit. An unhealthy sleeping pattern such as going to the bed late can have a detrimental effect on your health. Read on to know the impact of your sleeping habits and the differences between early birds and night owls based on the same. Also, you may be interested in connection between sleeping environment and proper sleep. It may be find by the link 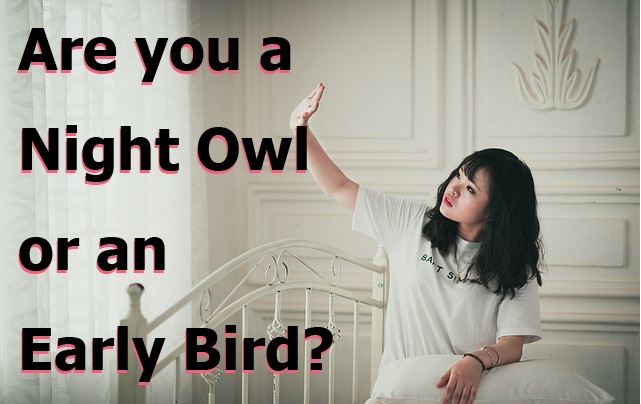 It is obvious for the night owls to experience drowsiness and fatigue during the daytime. While staying aware at night till late hours, they forget that the clock doesn’t work at their whims and fancies. They have to rush to their office or other activities at dawn whether or not they have had enough sleep.

If they go to bed late, they get to sleep only for a few hours, which does not allow sufficient time for the mind and body to refresh or repair itself. The result is evident for them to experience and others to see the next day morning. They are unable to meet the demands of a fast-paced life and fail miserably.

As far as perfectionism is concerned, early birds score over night owls. Early birds have a better control over their routine and other things. They also have the ability to plan the day well in advance and hence, are less likely to falter. However, the night owls are often unable to match the early birds and tend to make more mistakes due to irritability and fatigue.

The personality trait of being agreeable is linked to your habit of getting up early in the morning. The early bird types usually show a higher level of cooperation with family members as well as peers. Those who have a habit of staying awake till late in the evening tend to be more irritable during the daytime and hence, are less likely to cooperate with others.

You may think that being awake at night can boost your creativity. But, this is not true. It is agreed that some scientists, musicians, and artists are known to be night owls. But, these are pure exceptions!

The fact is that your creative thoughts can take a huge beating if you do not feel fresh enough during the daytime. It has been found that the early birds are more creative and can convince others of their innovative ideas more easily than the night owls.

A striking difference between the morning types and night types is the former usually have a higher level of determination and persistence than the latter. The early birds are more likely to be dedicated and can channelize their efforts to achieve their goals in life.

Morningness is also linked to proactivity and conscientiousness while the nightness is linked to indecisiveness and procrastination. When taken together, these traits shed light on why the early birds excel in their academic and professional responsibilities more easily.

Staying awake till late can reduce the dopamine levels in your nervous system. This may act as a risk factor for most addictive behaviors, such as smoking and alcoholism. That is why; night owls have a tendency to smoke more cigarettes and drink more alcohol compared to the early birds.

You will be surprised to know that night owls usually have a tendency to spend more, while the early birds have a financial strategy in place and plan their life well including their expenses and spending habits.

Being an owl or an early bird could become a matter of preference if you change your habits. Setting up a routine and ensuring your sleep is protected from disturbances such as an uncomfortable sleeping mattress (you can find tips on choosing the right one here), excessive illumination, and sounds will help you to stick to a healthy sleeping pattern.