The movie, An Insignificant Man, which has a star cast comprising Yogendra Yadav, Arvind Kejriwal, Santosh Koli, and Manish Sisodia with a duration of 1 hour and 36 minutes takes, one to a journey of significance story. This documentary shows that how after the anti-corruption demonstrations opened a fresh political party to battle the elections in Delhi by Arvind Kejriwal without his team members. This is the second documentary after the release of the movie “Sachin: A Billion Dollar Dream.” 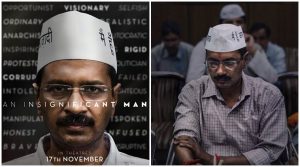 The rule of a good documentary is that they are not a part of an imaginary tale and one does not remember that the incidences are taking place on the screen. It should be like experiencing the story live. It is a fact that “An Insignificant Man” not only fulfils this criterion but also exceeds it. The character of Arvind Kejriwal turns out to be the best part in the film which is based on his own life and the greatest moment is when he takes on the political champions at the time of his entry in the legislative assembly elections of Delhi. The filmmakers Vinay Shukla and Khushboo Rankahave shot the scenes like the turmoil in the capital and the ringside opinion of how a political party is created and how elections are really fought with extreme care.

Nevertheless, the directors have made the most excellent use of the access provided to them while shooting and shot some spectacular scenes. The real victory of the documentary is the sharp neutrality that the film preserves throughout the 96 Minutes of its run-time. Editing by Manan Bhatt and Abhinav Tyagi is done passionately and is the strongest part of the whole documentary because of the way they showed a logical tale as if one is watching an extended thriller movie.