HomeNewsYoutube Rolls Out Its Trial App, Uptime, For Everyone
News

Youtube Rolls Out Its Trial App, Uptime, For Everyone

YouTube has been working on various secondary applications and projects to deliver a wide assortment of its products and services. Uptime, an experimental app that enables the user to watch videos with friends and availability of commenting and reacting feature has now been opened to all the users now. 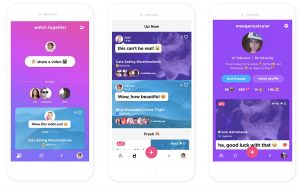 The app was first rolled out in March this year through Google’s internal incubator in order to test more social and interactive way to see YouTube. In the initial days of its launch, an invite was mandatory to experience it, this requirement is eliminated some days ago.

Uptime allows the users to connect with friends while watching the videos on YouTube. Your friend can either watch at the same time you are watching a video or even join it later to check others response to the video as they watch. This gives features of Uptime and makes it interactive and live while watching alone.

The response that is received in the form of emoji, while watching the video is taken from the other live video streaming platforms such as Twitter-owned periscope and Facebook Live. The emojis that can be used include heart eyes, grimace & angry face, crying face, and surprised face. There is one more interactive feature that can leave sparkles when you tap on the video but it can be only seen by those who are watching the videos in real-time with you.

From of the time of its launch, Uptime has been added with various new features such as music video, the friend-finding function for Facebook, and its home screen has also been refreshed to make user accessibility easy. The concept of co-watching isn’t new, as there are various apps providing such features such as Let’s Watch It, Fam, Tumblr’s Cabana, and many others. Even Skype showed its interest to implement this feature in future.
YouTube’s Uptime is now one from several to appear on Google’s Area 120, which enables business-minded employees of Google to try out new ideas. This program of Google has already introduced other projects such as Grasshopper, an app that teaches how to code, Super Sonic, a voice messenger app, and Tailor, a personal stylist app and many others. These apps aren’t introduced publicly.

Uptime so far didn’t gain that crowd owing to the requirement of an invite to test. Thus in last week, it has eliminated invite code, which means the app can be now used by anyone.

To all the YouTube users, check out Uptime and enjoy the moments with your friends no matter how far they are.