What Is Earned, Owned, Paid And Shared Media?

The estimated number of social media users in European countries surpassed 39 million in early 2017. And as more and more consumer activity moves online, businesses are having to adopt to very different and dynamic marketing channels. The lines between traditional and contemporary media are merging as the old model of primarily paid media, continues to crumble. 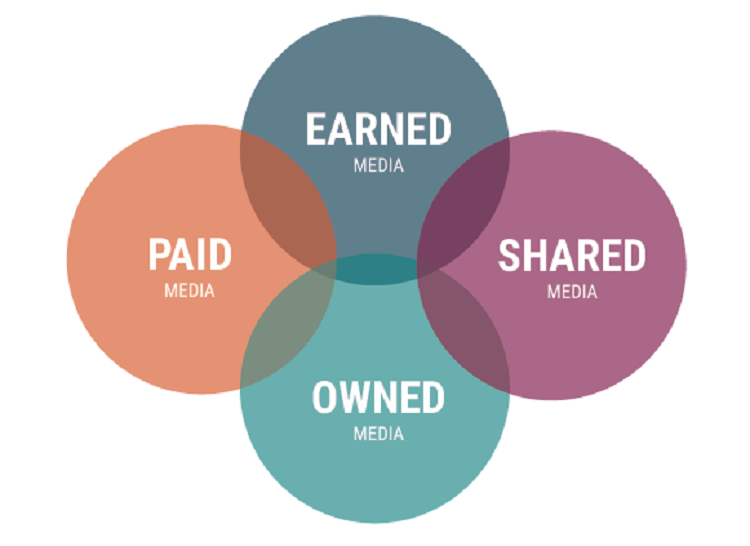 In this article, I want to look at the four forms of media in which advertisers and marketers now operate: paid, owned, earned, and shared media. Let’s start with the oldest and most familiar of these.

This type of media has been around for a long time and, as its name suggests, is any paid promotion of a product, service or brand. Paid media gives immediacy of control and scale to their marketing. Traditionally, it has been comprised of TV and print ads. Since the rise of digital channels, sponsored social media posts, pay per click ads, and displays ads are now considered as part of paid media too.

Paid media is structured around three key components: frequency, reach and message. These elements determine whether an ad is appropriately executed or not. The frequency, for instance, measures the times your target market was exposed to the material. On the other hand, reach is the range of audience in which the material was able to reach while the message is the idea the business or brand is trying to convey to a particular crowd of individuals.

There are several ways to measure paid media’s ROI, both for traditional and contemporary channels. When it comes to traditional media, Nielsen TV and Nielsen Audio are the top credible media measurements. In digital marketing, analytics software is typically used to check a campaign’s ROI. One of the best examples is Google Analytics. This software allows any individual to monitor and filter information into three types: organic, paid traffic, and referral.

Owned media is a new channel created after the emergence of digital platforms, specifically those that fall under the umbrella of social media. It refers to online assets that an individual actually possess but does not pay for in the traditional ‘paid ads’ sense of the word. So these could be websites, social media pages, blogs, YouTube channels, case studies, whitepapers and eBooks.

Owned digital media are, perhaps, the most cost-effective way to promote and gain brand visibility— especially for start-ups. They offer longevity as well as maintains and builds long-term relationships with potential and existing customers. And because you own them, you have total control over the content. The downside is that, unlike paid media, which has an established circulation and readership, it’s up to you to build an audience for them.

The use of owned media can be optimized as well through the incorporation of other online platforms. So, if you have a blog, sharing it on a Facebook page or group can aid to boost the page’s reach and visibility.

The tracking and collecting of data for owned media are straightforward. It only needs analytics software such as Google and Facebook Analytics. There are other third-party applications offering the same service as well. Moreover, when measuring its ROI, tracking is not enough. The most crucial task is to choose what data to keep an eye on and how to make sense of it appropriately and accordingly.

Earned media, also known as public relations, is an advertising strategy which helps to position a brand as a thought leader in its field. It involves press releases, media relations, and media alerts. However, in the world of internet marketing, reviews, brand mentions through multiple social platforms, backlinks, as well as influencer relations are now considered as part of it as well.

Earned media is also referred to as brand advocacy and is considered as one of the crucial elements when measuring a brand’s presence. And usually, it is the number of shares and comments that indicates whether the brand-building campaign is a success or not.

Also known as social media, this marketing channel is a new form made after the rise of online platforms. It shares a lot of similarities with earned media in terms of what platforms to use— facebook, youtube, web pages. However, it varies in interaction efficiency. It is because the shared medium is much more personal and highly social.

The highly interactive and personal approach of shared media renders a very critical role in brand building, which is to build and develop relationships with your potential customers. This trust-building approach also helps to earn and increase their loyalty.

On the other hand, to build a brand or to market without a clear understanding of how these digital forms work may lead to poor results. Hence, it is wise to have a well-thought brand strategy beforehand, especially that these mediums continue to progress regularly.

While advertising through the aid of television ads, advertorials, and word of mouth is still valuable and useful, the integration of earned, owned and shared media into more traditional forms of marketing has opened the door for both small and established businesses to reach huge audiences. Whilst these marketing channels are efficient and cost-effective, they do take time to get right, meaning it’s crucial to have a solid marketing strategy in place first.