Ever considered watching DVDs on a variety of devices in the hope that they will replay smoothly? It appears to be impossible because not every device has a DVD driver, and it is annoying to constantly carry an external DVD driver along. It is now possible to convert DVDs into digital versions. Users may be able to watch the videos on many devices thanks to it. Users only require a DVD to MP4 converter for this.

MP4 is one of the most used video formats. Users can watch DVDs more conveniently once they convert them to MP4 format. Additionally, it is easier for users to create backups and preserve them when they convert them to MP4. For this reason, selecting the best DVD to MP4 converter is crucial. Here, VideoByte BD-DVD Ripper, a potent DVD to MP4 converter that easily digitizes physical DVDs, comes highly recommended. A thorough introduction is provided here, https://videobyte.cc/convert-dvd-to-mp4/.

What do users have to say about the BD-DVD Ripper?

Even while MPEG compression can make DVD more effective, it still has significant limits on streaming, mobility, and playback compatibility.

Moving Picture Experts Group, or MPEG for short, is a working group of authority established by ISO and IEC to develop guidelines for the transmission and compression of audio and video. The primary standards that MPEG has established for digital media include the following:

For broadcast TV systems, MPEG files are more frequently utilized because they work well with many common devices and media players. After being converted to the MPEG format, the DVD video can have a wide range of resolutions, bit rates, and file sizes.

The most widely used approach is to convert DVD to MPEG in order to increase the use of DVDs on the majority of social networking platforms, portable devices, and well-known media players.

The Windows version’s user interface is dark blue. It is simple and easy to use. On the main interface, users may quickly find what they need. Furthermore, VideoByte BD-DVD Ripper for Windows comes with a useful toolkit that includes a Media Metadata Editor, Video Compressor, GIF Maker, 3D Maker, and Video Enhancer. 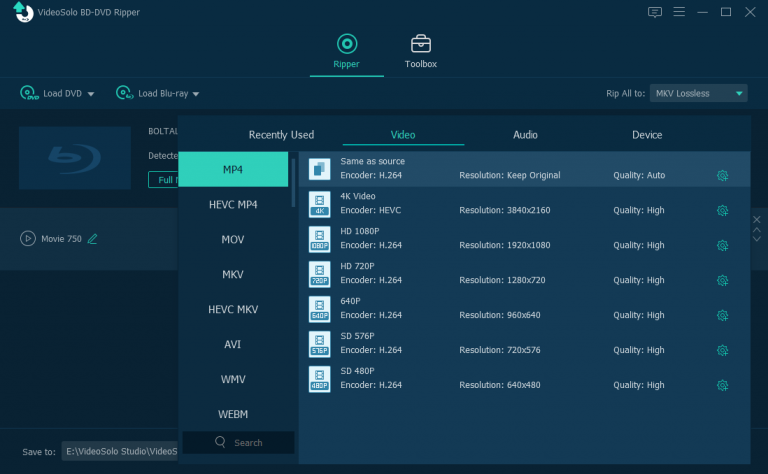 What do users have to say on VideoByte BD-DVD Ripper (MAC Version)?

The Mac version’s UI is grey, as opposed to the version for Windows. However, using this program is also straightforward for users to understand. On the primary interface, all of the functionalities are listed and are quite simple to use.

To edit video files or create 3D videos, select “Clip,” “3D,” and “Edit” from the top menu bar. Users can preview DVD/Blu-ray movies in the preview window on the right side of the screen.

Users are aware that Apple does not enable the Mac computer to support the magnificent Blu-ray discs. However, this hasn’t stopped Mac users who enjoy high-resolution Blu-rays from doing so. Users can watch them on their Mac by connecting an external Blu-ray drive or can rip the disc to the computer’s local hard drive to prevent scratches and watch it whenever preferred. This page will provide the easiest and fastest method for ripping Blu-ray movies to Mac.

A fully functional Blu-ray ripper program for Mac OS and Windows is called VideoByte BD-DVD Ripper. With it, users can quickly and easily rip and convert Blu-ray movies to more than 300 different output formats.

Also, users may customize their films with the robust editing tools integrated right in. For more details, https://videobyte.cc/best-blu-ray-ripper/ will clear all the queries.

A new version of VideoByte BD-DVD Ripper for Windows has been launched with significant updates over the previous version. However, work is still being done on the new Mac version. This implies that Windows and Mac will have separate and improved user interfaces.

It is obvious to wonder how to choose the greatest DVD ripper to assist while deciding on the best method for converting DVD to MP4. A competent DVD to MP4 ripper must perform well in a number of areas, including quick conversion times, a wide range of output formats, an easy-to-use user interface, and more robust video management capabilities. Taking everything into consideration, we now recommend VideoByte BD-DVD Ripper.