Geometric dimensioning tolerance or GD&T is a system that elaborates on communicating engineering tolerance. There the language of different symbols used as an engineering drawing. To fill design with life, engineers need an approach or manufacturing mechanism to communicate in the best way. For all such help, geometric dimensioning tolerance is there. There is a particular set of symbols used for defining the relation between multiple features while engineering. One example of tolerances of locations is the true position symbol can communicate more accurately to the designers and engineers. 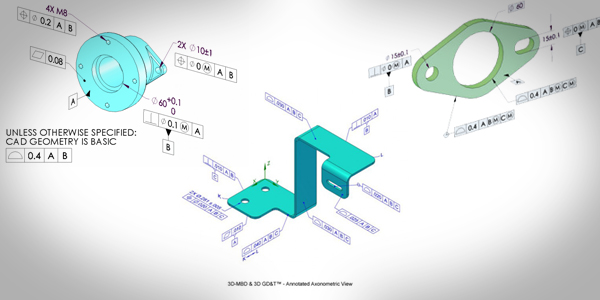 As we all know, geometric dimensioning tolerance is based on symbol language to communicate the designers and engineers. Symbol language helps in indicating the deviationof the part features from the listed designmodel. Alldetails included in this symbol language dimensions, tolerances, rules, symbols, and definitions. Some commonly used symbols with briefdescription listed below:

Least material as its name shoes is a condition of feature size symbol. It is used for indicating dimensions or size. It describes the least amount of material in particular dimensional tolerance.

The symbol of the datum is a plan of an exact theory. The location of the point in the dimensional tolerance area is referenced here. The user can consider it as an anchor for entering. These features are referenced from one another. The datum featured should be controlled while doing measurements.

The most common symbol in the arena of dimensional tolerance is flatness. This symbol references the datum symbol regarding the other features. The flatness symbol becomes more beneficial if the feature defines drawing uniformly. It does so without narrow downing the different dimensions of the drawing.

Its another symbol is related to the datum. There are no callout drawings. It applies to the least material conditional and maximum material condition. The runout symbol measures the varying reference features from one datum to another when it rotates around 360 degrees. It’s an important symbol to control the condition of circulation.

Though the symbols used made it easier to comply with the design and engineering requirements for making a model yet geometrical dimensional tolerance has a significate impact. A complex machine as being an essential part of dimensioning tolerance has a few benefits that listed below:

Symbols, as well as the features under the dimensional tolerance, assist in saving time and money. Also, it is not so hard to ensure the true position symbol in the drawing.

We found that geometric dimensioning tolerance uses symbols and other features to communicate the designer’s and engineers’ required design from the above conclusion. There are a lot of dimension tolerance symbols used in complex machining for making an accurate model. A true position symbol not only helps in digital designing but also ensures dimensional tolerance. Symbols play a vital role in conveying the exact information.