Ethyl acetate is the most common ester of ethanol and acetic acid. It is colorless and has a characteristic fruity smell that is responsible for the sweet smell of overripe fruit or a banana flower. It is manufactured in high volumes for utilizing it as a solvent and has the advantages of being volatile, non-hygroscopic and relatively non-toxic. 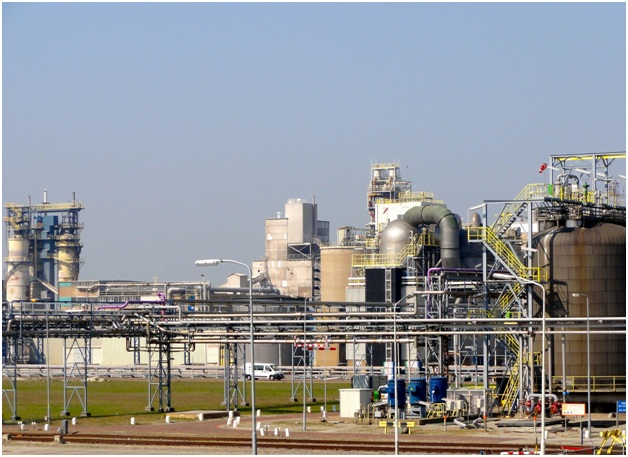 Traditionally, on an industrial scale, ethyl acetate is produced by three processes namely the Fischer Esterification Reaction, the dehydrogenation of ethanol and the Tishchenko Reaction. Though the processes have been existing in the industry for a while, each one of these processes has some drawbacks attached to it. Let’s understand them in detail: 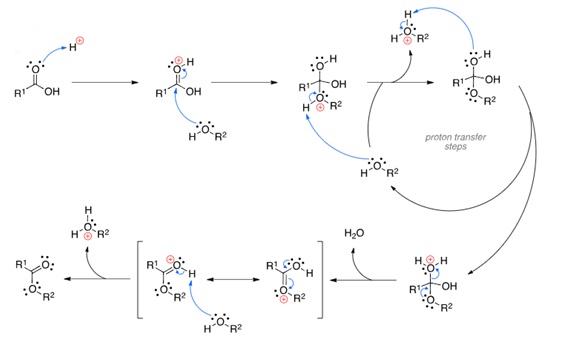 Drawback: The main disadvantage for this process is a comparatively slow rate of reaction. The reaction depends on the reaction conditions and generally may take a couple of hours to years.  Another issue with this process is the separation of pure components. It becomes very difficult to extract pure components due to the presence of azeotropic groups like ethanol-ethyl acetate-water, water-acetic acid, ethanol-water, ethyl acetate-ethanol,  and ethyl acetate-water.

This method involves the catalytic dehydrogenation of ethanol. It is a more cost-effective method as compared to the Fischer esterification process but requires surplus ethanol for successful completion. Typically, the dehydrogenation is conducted in a conventional tubular reactor, under a temperature range from 200–260°C. A copper or copper chromite catalyst is used to accelerate the reaction.

Drawback: Though the hydrogenation process in itself is cost-effective, it produces by-products like hydrogen which make the purification of acetate an expensive task.

Tishchenko reaction can be defined as an organic chemical reaction that works on the principle of dismutation or disproportionation of an aldehyde. It is performed in the presence of a sodium or aluminum alkoxide catalyst, typically aluminum triethoxide. Most of the ethyl acetate produced in Germany and Japan is manufactured through this process.

Drawback: The major drawback in Tischenko reaction is although this process uses only
one non-corrosive feed, a lot of difficulty is faced in the handling of acetaldehyde due to its non-availability outside the petrochemical industries.

To overcome these inefficiencies, many new technologies are now being incorporated into the ethyl acetate industry. Let us learn about the most popular of them.

Ethyl acetate is an essential organic solvent. The traditional processes that were used for its production rendered many drawbacks that affected either the quality of ethyl acetate or added on to the expenses in the manufacturing process. One of the primary issues in the production process is the limitation of equilibrium resulting from the reversible reaction of alcohol and acetic acid.

The introduction of newer technologies such as the reactive distillation process has improved the production rate and cost altogether. Obliterating the limitation of equilibrium is the foundation of the reactive distillation method. It overcomes this issue and obtains a high conversion of ethyl acetate during the production process. This process not only promotes the conversion rate of the reaction but also reduces both the operational as well as the capital costs.

Switching to Automation with Artificial Intelligence

The penetration of artificial intelligence, machine learning and deep learning in diverse fields, including the chemical production industries such as that of ethyl acetate has successfully enhanced the efficiency through automating processes.  Many top suppliers in the ethyl acetate market have started showing an inclination towards adopting AI. A major global supplier in the ethyl acetate market, BASF SE, has recently announced its membership in Systems That Learn (STL), an artificial intelligence laboratory.

Artificial intelligence can be used to predict the demand for raw materials like ethanol and acetate in the ethyl acetate industry to fulfill the power and energy demand-supply. It can also be used in softwares that can help the ethyl acetate manufacturers with assessment and preventive management, limiting machinery failure. Computer codes based on artificial intelligence can successfully predict the phase diagram and highlight the conditions that have thermodynamically distinct phases and are coexisting at an equilibrium.

Enhancing Plant Performance through the Internet of Things (IoT)

The chemical industries in today’s changing world, are highly competitive and actively need to adopt innovative technologies like IoT to have an edge over their competitors. IoT is the stepping stone for machine learning technology in asset management and production processes.

In ethyl acetate industry, it can be utilized to capture real-time data on the status of assets and their performance. It can also efficiently look over the product quality, process parameters, storage capacity & inventory, production costs, and logistics. With the big data in picture, the capturing, processing, storing, and analyzing of a vast amount of data coming from the production plant can be used along with advanced algorithms to optimize the plant performance.

It can also be used to predict, simulate, and prescribe maintenance and increase the availability of the asset. Furthermore, machine learning technology with artificial intelligence also helps ethyl acetate manufacturers to run simulations to test the sustainability of ethyl acetate products lifecycle as well as their environmental impacts. For example, Dow Chemical Company, one of the major ethyl acetate suppliers, recently collaborated with TeslaGen in an attempt to find new crop protection for farmers across the world.

Augmented reality or AR is the real-time collaboration of the physical world elements and the digital information. The chemical manufacturing industry is the most recent recipient of the augmented reality innovation.

Augmented reality is used to train the new recruits at the chemical plant by demonstrating to them the precarious plant environment in a virtual reality format. Ranging from training on the operational settings of reactors and boilers, handling of toxic chemicals, to preparing them for varying conditions like humidity, temperature, and pressure, AR does it all. Using the AR software for programming the plant conditions, industries can perform training sessions using AR tablets and AR handsets.

AR can also be used to assemble the expensive, heavy and complex machinery in the ethyl acetate plant using wearable AR devices. The devices will help workers to understand the functioning of the complex equipment and facilitate safe assemblage. Another issue that crops up in the manufacturing plant, is the delays caused by minor technical glitches. It also adds to the maintenance cost of the plant. AR-enabled softwares offer video tutorials to fix these issues without needing an expert.

Over the years, the ethyl acetate market has experienced a fluctuating supply due to the limitations prevalent in the existing manufacturing processes or many times lack of adequate technology to optimize and expedite the processes within the chemical plant. With advancements in technology and innovation in the chemical industry, the ethyl acetate market is anticipated to establish an upper hand in manufacturing.