HomeBusinessHow Latin America Became a Top Destination to Outsource IT Services for...
Business

Outsourcing has been around for quite some time but it was never as popular as now. Pandemic has brought a lot of changes in our lives and work and made us reevaluate different aspects of it. Remote working is one of them. With offices being out of reach, we got an opportunity to explore working with different cultures and countries. 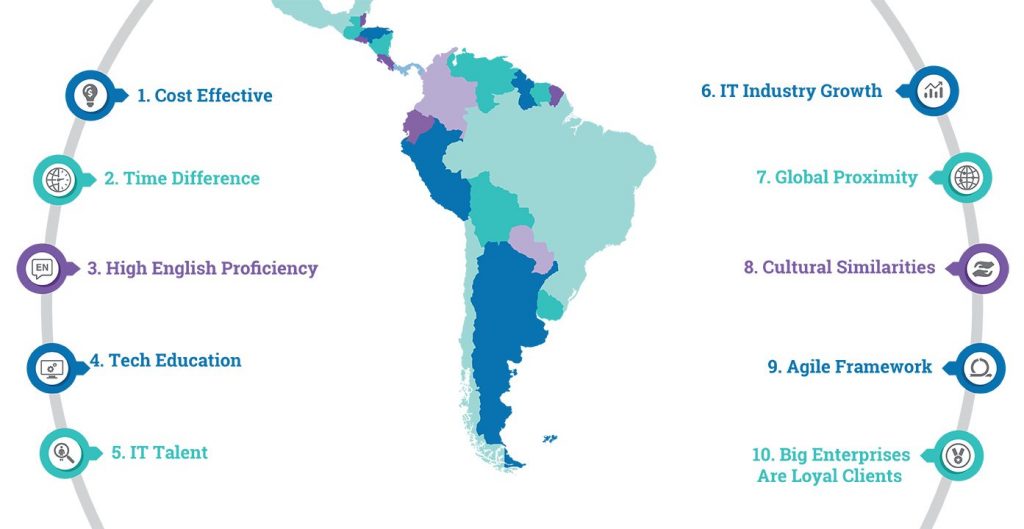 Latin America and Mexico especially became the main outsource destination of 2020. They have their benefits compared to both the USA and Eastern Europe. So let’s learn about the main benefits of outsourcing software development to Mexico and Latin America.

High-Quality IT Education and Infrastructure

Latin America has a great talent pool of software engineers. Due to the governmental support of the IT sector development, all developers wannabees managed to get a solid base of knowledge. Some worldwide companies as Microsoft provide education programs to the countries in Latin America in order to support the growth of IT in the region. Therefore, even higher qualified professionals are to be expected in the job market in the upcoming years.

Companies do be afraid of outsourcing due to the difference in time zones. With the difference from 6 (Eastern Europe) to12 (Asia) hours, it is hard to manage the project: your employees literally sleep while you are in the working mood. So either you have to build your day around their workflow or you will have to wait up to 12 hours for an answer.

It seems disastrous to many companies. Luckily enough, Latin America has from little to no time difference with California. It enables real-time communication and collaboration. If you want some changes to be done or some bugs fixed, it can be done surprisingly quickly. While outsourcing to Mexico, you do not have to wait for employees to wake up.

Can you imagine: you get great developers and high-quality service for a suspiciously good price? No need to imagine. It can happen if you decide to outsource software development in Latin America. There are considerations to keep in mind when outsourcing work to Mexico. For example, you have to think about how much is considered a fair amount to pay your remote workers, and how to send money to Mexico. Pay rates of the developers are lower than in California, for example. You may be surprised by the price and think that something is wrong. However, it is completely real and it is not a fraud (unless you found some unreliable outsourcing company). Startup companies really should use this benefit and grow into successful companies by doing so.

There is a stereotype that offshore developers change hastily the projects and are never devoted to any company or project. In some cases, it is true. For example, developers from Eastern Europe are in seek of new projects all the time and can even drop the project halfway. Software engineers from Latin America are built differently. They keep on working for one company until their task is fully done. It increases the reliability of employees from Latin America. Moreover, if a developer quits the project halfway, there is a need for knowledge transfer which can take some time that is so precious today.

As we have already mentioned, time is money and a key to the survival of startups. If you want to build an in-house team from scratch, you need a lot of time. Firstly, you have to recruit developers. It requires a network (if you want a developer that your friends can recommend you) or an HR (they can assess the candidates adequately). In the second case, you will even have additional costs to cover a professional recruiting manager. Secondly, new employees will need time to readjust and understand what the project is about.

With outsourced developers from Latin America, it is not the case. You can forget all the problems mentioned above. Outsourcing companies have their software engineers ready. Even though we have stated that they change projects less often than their colleagues from Asia and Eastern Europe, Latin American employees still have a lot of experience in different projects. They can quickly grasp the core meaning and main tasks of the new project. Moreover, they will likely have the solution ready from their huge background of development.

Latin America has become one of the top outsourcing destinations of 2020, with Mexico being the number one country in the region. They deserve this title for a variety of reasons.

Latin American developers provide high-quality service due to good education. At the same time, they will not charge as much as software engineers do in California and will save you time through their ability to adjust to new projects quickly. Latin American employees will bust two main stereotypes of outsourcing: they are loyal to their projects and you do not have a big time-difference with them. They will make a great fit for any IT project that you have to offer.