Burger King and Mcdonald’s don’t have a great history. Both these chains started almost at the same time. Burger King opened its first outlet in 1954, with McDonald’s following suit in 1955. But the latter achieved more success more quickly. Burger King had a bit of delay in finding success for its rival but soon became a household name as well. 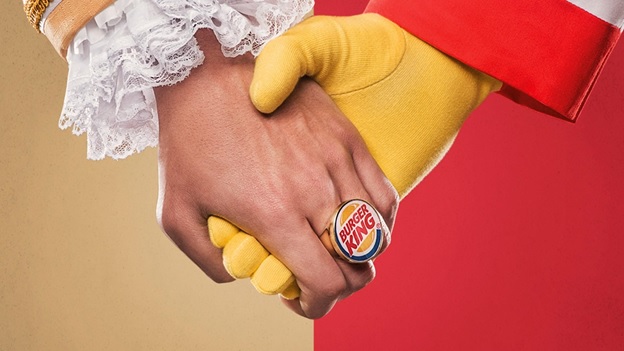 Both chains have the world’s best selling burgers. To talk about numbers, Burger King claims 2.1 billion Whopper sales per year while McDonald’s sales are 550 million Big Mac’s a year. Even though McDonald’s has more chains than Burger King, the former has had a problem maintaining sales in the past few years.

Even though one would expect Burger King to be a bitter rival, looking at both brands’ history of taking shots at each other. There have been instances where Burger King has taken the high road and tried to help McDonald’s on the cost of their own sales.

As shocking as it may sound, it is actually true. Burger King has actually had marketing campaigns supporting McDonald’s sales. Talk about healthy competition! If you want to know more about that, you’ll find all you need to know going down.

‘A Day Without A Whopper’

You all know about Whopper being the signature as well as the best-selling burger of Burger King. So, it’d only make sense that they try to sell more of it and not less, right? Wrong! Back in September 2019, Burger King launched a campaign called ‘A Day Without A Whopper.’ They stopped selling the Whopper for a day. The reason is all the more shocking. They did this to boost Big Mac Sales.

This campaign was only limited to Argentina, but still, this was a really big step and left many people wondering, ‘Why?’

When I discovered the reason, I had a newfound respect for Burger King. The reason they stopped their sales of Whopper was for a fundraising campaign McDonald’s was doing at the time. The sales from Big Macs sold that day would go to a charity for Children with Cancer.

Burger King wanted to be a part of this good deed, and they actively did.

They not only removed the Whopper from all of their outlets in Argentina but even went so far as to encourage customers, who came seeking the Whopper, to buy the Big Mac. Burger King might not have made Whopper sales that day, but it won the hearts of people all over the world.

This campaign made such a big impact that even though the campaign was limited to Argentina, #DayWithoutWhopper was trending all over the world. It takes a king to join hands with the rival for a good cause.

The cat-mouse chase between Burger King and McDonald’s continues but Burger King once again proved that behind the trolling and roasting, they have a golden heart. In November 2020, Burger King posted a letter on their social media outlets ‘endorsing’ their rival brands and that included McDonald’s.

In 2020, the Covid-19 pandemic happened and affected the lives of all the people in the world. Needless to say, the lockdowns that happened slowed down businesses and led to a lot of layoffs and shutdowns. One might suppose that it was one for himself at such difficult times, but Burger King proved otherwise.

The letter started with their classic bickering style, “We never thought we’d be asking you to do this…” but the letter gets sentimental and heart-touching as you read further. In normal times they would’ve wanted all the customers to themselves, but the letter urged their fans and followers to order from McDonald’s as well. They also mentioned other brands like KFC, Subway, Domino’s Pizza, among others. But it’s the McDonald’s endorsement that makes it sentimental, keeping the two brands’ history in mind.

This brought to light that food outlets, even the giant ones, were suffering, which could amount to a lot of layoffs which would, in turn, worsen the situation.

They might not have said it straightforwardly but put it in their classic Burger KIng style. The letter read, “getting a Whopper is always best; ordering a Big Mac is also not such a bad thing.”

This was a classic move as it endorses McDonald’s but doesn’t downplay their own brand.

Well, Burger King and Mc Donald’s might not be the best of friends, but the facts show that Burger King has a soft side when it comes to situations that call for help. It also shows that they value lives over sales, which calls for mad respect.