Having Fun with 3D Pens

The technology day by day surprises us with inventions that seem out of a movie of science fiction and make us believe that in some future not very distant we will be living like in the film “Back to the Future”.

The most recent case is a pen that breaks the 2 dimensions to which it was tied and now allows us to create 3-dimensional designs, which will give a new meaning to the term “freehand painting”.

We can compare this pen with a thermal or silicone gun because it has a similar operation, with the difference that the plastic filaments that the pen produces are much thinner, sturdier and faster drying.

These plastic filaments are PLA and ABS, the same ones used by 3D printers for your designs, and melt at the tip of the pen, but dry quickly, however it is recommended to handle these items with caution to avoid burns. 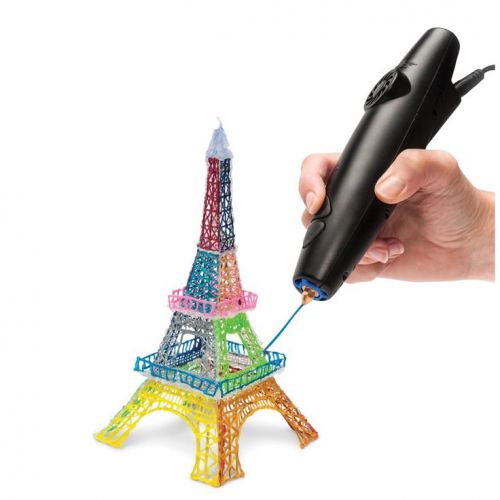 Unlike printers in 3D, where certain programming skills are required and their software is handled, this ballpoint pen only requires the creativity and inspiration of the draftsman to obtain the desired design; It is worth clarifying that it demands a little practice while mastering the technique.

At present there are at least 2 models of this type of pens: the 3Dooler and the LIX, each with very special characteristics.

3Dooler resembles one of those glaze guns due to its thickness without this making it uncomfortable; Was the first prototype that came to market and is operated by 2 buttons (Fast and slow), which allow to regulate the way the molten plastic comes out of the pencil.

This pen works by electric current and has a fan integrated in its tip that allows it to cool and quickly dry the plastic as it comes out.

As a curious thing, the WobbleWorks company required 30 thousand dollars for the commercialization of the 3Dooler and tried to raise them through the web page Kickstarter and to his surprise to the few days had already collected more than 1 million dollars.

The LIX was created by the designer Anton Suvorov and presents a more stylized form that emulates a common pen, with a size of just over 16 centimeters long, 1.3 centimeters thick and only 35 grams in weight .

This ballpoint pen incorporates a small electrical resistance that reaches 150º centigrade and heats plastic bars that are about 10 centimeters long, equivalent to 2 minutes drawing in the air.

The power is obtained by a cable that can be connected to a USB 3.0 port of any computer, which is another great advantage to consume such low energy levels.

As you can see, the future is closer than you think. What design would you make with a pen like that? If you are interested, you can check this list of the best 3D pen models available today.