Flutter Vs. Ionic: Which Technology is the Best for Your Next App Development?

When choosing a framework for developing cross-platform mobile applications, we find different alternatives on the market. Two of the most popular frameworks today are Ionic and Flutter.  You should familiarize yourself with these technologies. 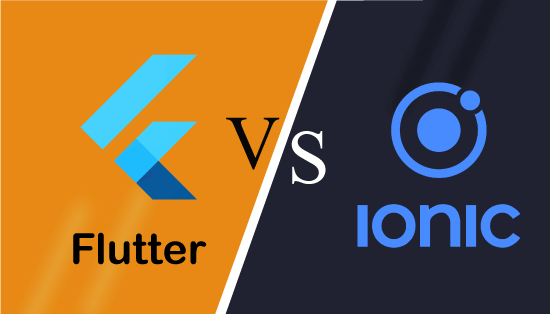 Being in the industry for over ten years, Surf understands that using the right tools will save you time, money and guarantee the best results. We will compare Flutter vs Ionic to understand their important qualities and which one to use for the next app development project.

Flutter Vs Ionic: An Overview

Ionic is a framework originally based on Angular. Its initial version was released in 2013. It allows programmers to develop apps with web technologies. Use standards like HTML, CSS, and JavaScript. Prepare the code of an app so that it can work on both iOS and Android platforms. Also, it offers the possibility of making one more compilation and making a desktop extension based on ElectronJS. This leads to a Progressive Web App.

Ionic is an open-source user interface (UI) toolkit that supports smooth integration with other open libraries and frameworks like Apache Cordova. It has become popular among the developer community over the years and is considered easy to learn. There are top brands that have used this technology to develop their apps. Examples include Sworkit, MarketWatch, Diesel, and others.

Flutter is the Google company’s open-source framework for the development of native applications. Developed in 2017, it is a high-performance app development platform with great ease and speed of development. Flutter is managed with EMCA standard support. Using the same code, it allows the development of apps compatible with iOS and Android at record speed. Based on experience, Flutter improves application performance.  It reduces its size and is generally more stable, and produces fewer errors.

The primary purpose of this tool is to act as a user interface toolkit for creating good-looking cross-platform applications that work smoothly.  Flutter runs on the Dart programming language and uses Objective C and Swift to integrate iOS and Java for Android. Currently, Flutter doesn’t have a big support community like other cross-platform apps, but this is changing slowly as more developers are starting to appreciate Flutter’s capabilities. Other famous apps that went along with Flutter include Stadia, New York Times App, Tencent, and several Google applications.

Ionic and Flutter share a common vision of building high-performance apps that work on all devices. However, their core philosophies couldn’t be more different. The primary difference between Ionic and Flutter is that Flutter dwells in an enclosed ecosystem with its standards. Ionic is based on open web technologies that ‘lives’ on common web standards.

A single set of code written in Flutter and Ionic can perform well on computers and smartphones because both frameworks are cross-platform technologies. Flutter, however, has some limitations in web deployment. If you intend to develop Progressive Web Application (PWA), Ionic is the ideal option. On the other hand, older versions of Ionic have security issues because they don’t support the uglifying of code. Flutter makes sharing code across various platforms easier. That’s why it is highly preferred for the development of MVPs.

There is no clear winner among the two cross-platform development technologies.

Hot Reload is a feature supported by Flutter. It updates apps instantly after you change the code. This creates the perfect opportunity for experimenting and also fastens the process of updating an app and fixing bugs.

Ionic does not have a similar feature. To perform any change, you have to refresh the whole application, slowing down development speed.

Flutter is the perfect option in this case.

Flutter might be a better option in terms of performance. However, Ionic gives the same performance in many cases, fastens whether you write a more standard consumer application or for employee use. Keep in mind that performance almost always comes down to how the code is written. It does not depend on the platform or framework that is chosen.

They don’t use native AI elements of the app’s platform. Ionic uses standard browser runtime and resources. So the size of the application is usually very small. Flutter requires a lot of code for very basic applications because it sends all that runtime even though the browser already has functions available for almost everything. So if you want to attain the Performance Standards set by Google for Progressive Web Applications (PWA) or to rank high on SERPs, it will be nearly impossible with Flutter’s current performance on the web. Flutter utilizes a rendering engine and does not require a communication bridge in its module.

Flutter is the perfect option in this case.

Ionic is based on web technologies, making it easier for Javascript and CSS developers to create a cross-platform network. If you are new to coding, learning Ionic is quite similar to developing web applications.

On the other hand, Flutter requires some top-level dedication because you have to start from learning the Dart programming language. However, if you are familiar with Javascript, Ionic, or React Native, this should not be a complex task.

Ionic is the perfect option in this case.

How Easy Is it to Find a Developer?

Flutter follows React Native closely as the second most popular cross-platform framework used by developers. Ionic comes fourth. The number of developers who prefer using Flutter rose from 30% to 39% between 2019 and 2020. There was a decline in those who prefer Ionic as the number went down from 28% to 18%. That said, you can easily find developers using both frameworks in 2021.

The future is bright for Flutter because it is backed by giant tech company Google. Ionic will be preferred for hybrid application development in the future because it works on popular web technologies that will be around for some time.

You can opt for Ionic if:

You can opt for Flutter if:

Code quality plays a pivotal role in how both frameworks perform. Choose your developer wisely.

Ionic is ideal for web technologies that are widely used. Apps built on the platform perform excellently on desktops, mobiles, and the web. Flutter is a fresh technology using its own coding language in a closed space. It might seem like a limitation at first, but offers higher performance and several benefits.