A Basic Guide to VR Stocks

Over the next 5 years, there are a number of trends that are being pointed out by high-tech experts which will change our lives.  These trends include the Internet of Things which allows different devices to speak with each other without the need for human interaction.  An example of this would be instead of driving to your bank, your car will be able to talk to the bank computers and move the money around for you.  Another trend that is being pointed to is virtual reality also known by the initials VR.

Today, VR is still seen as strictly in the realm of gamers and this is because it still is.  The companies that are trying to dominate the market are staking their turf around what gamers want.  However, there is a lot of potential for VR to expand to all aspects of digital life.  Vanity Fair reported that Mark Zuckerberg sees the future of VR as more than a portal for games, but also for TV, movies, lectures and business meetings.  He believes that VR headsets will be able to eventually scan the brain and transmit thoughts to our friends in the same way that Facebook shares baby pictures today. 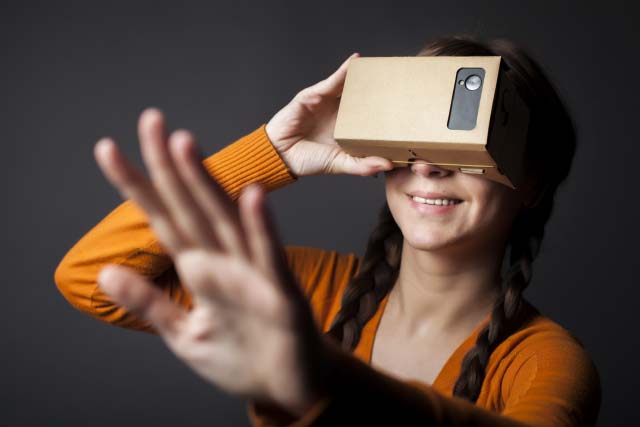 Of course, it is important to note that at this point the future of VR is not primed for this explosion of uses just yet.  However, as an investment, the future is now.  If you are interested in looking into the VR world, there are 4 companies that you should consider as they have already gained a head start in what is set to become a competitive market.

HTC – Can The Vive Revive?

HTC has been struggling to assert any investment worthiness on the Taiwan stock exchange.  Over the last few years, the stock has dropped to close to 17 percent.  However, there is some good news for the stock as HTC has been giving its VR competitors a run for their money.  This is due to the ambitious and energetic marketing of the Vive headset.

Vive was unveiled in March 2015 and since then has really hit its stride which has placed HTC as one of the dominant players in the VR market.  Gamers are understandably excited about the inclusion of Star Trek: Bridge Crew to the bundle that is offered.  It has also been announced that Vive will become wireless thanks to a boost from Intel WiGig technology.  CNET has reported that Vive is the only VR headset that will provide a truly walkable experience which keeps everything in proper scale.

At this point, you might be wondering when these advancements will become big gains to HTC investors.  The problem is that this is hard to say because HTC does more than just virtual reality with the smartphone division.  The results for the first quarter of 2017 were mixed and HTC is showing losses, but this could be slowed by the streamlining of operating costs. Aside from these big boys there are also plenty of virtual reality penny stock companies.

Like HTC, Samsung is a smartphone company that is diving in the VR market.  However, Samsung is a much more powerful player because it has the ability to take on Apple and the iPhone head-on.  The problem is that the company is still completing damage control in regard to the disaster in 2016 with the Galaxy Note 7.

The series of battery fires related to the phone has turned the smartphone into a $17 billion headache for the company.  This was not helped by the PR issues the company has when it pulled the Note 7 from the market.  However, Samsung has shown that it is willing to learn from the problem and there is nothing like new tech to help cautious consumers forget about the errors of the past.

In terms of VR, Samsung has the Gear controller which leverages the Oculus app and the Google Chromecast streaming adaptor to allow bystanders to see what is happening within the headset.  There has also been an introduction of a prototype display which has triple the pixel resolution of the Vive and the Rift.

When it comes to VR, the Google Glass was not the hit that the search engine colossus was hoping for.  There is also the issue of the famous ‘moonshots’ coming crashing down to Earth.  These include a number of solar-powered drones and high-flying balloons which are meant to bring WiFi coverage to rural areas.  However, if investors are able to count on anything, it is the fact that Alphabet learns quickly from its mistakes and the dip into the VR market could prove to be what investors are looking for.

Alphabet has been making waves in the market with the Daydream VR platform as well as the Google Cardboard.  This is an ultra-cheap headset which turns a smartphone into a VR getaway when used with Cardboard-friendly apps.  In terms of investing, there is nothing virtual about the benefits.

The GOOG class C stock is up 31 percent on last year and is trading at around $966 per share.  Alphabet stocks are also in a constant battle with Apple to be the world’s most valuable company.  Alphabet has a market cap of around $667.5 billion which is more than the GDP of Sierra Leone.

Facebook’s prized VR acquisition Oculus has not been the blue skies that the company may have been looking for.  Prior to the March 2016 release of the Oculus Rift, there was a lot of hype but the headset still faces a lot of competition from other VR players which have had much less attention.  This led, in part, to a price does of $200 for the Rift headset and the accompanying Touch controller.

However, this does not mean that Oculus should be taken lightly as Facebook has unlimited resources to throw behind the project until it takes root.  Facebook took a $2 billion bet on the company and they do not like to lose.  Additionally, Mark Zuckerberg sees himself in Palmer Luckey, the starter of Oculus.  When investing in Facebook, you should also consider that it paid $1 billion for Instagram in 2012 and the app has grown to more than 700 million users.  It is possible that Facebook could someday fold Instagram into VR someday, but hopefully, it will not be scanning the typical teenage brain.