HomeTechnology4 Advantages Of Automatic Soldering Robots You Have To Know
Technology

4 Advantages Of Automatic Soldering Robots You Have To Know

Soldering is one of the most critical processes in the fabrication of electrical components. Beyond the manufacture of these parts, soldering is the final step that makes sure the wires work with the boards – and vice versa.

With time, we have seen the shift from traditional modes of assembly into robot-assisted soldering solutions. Robots are now widely used for streamlining and automating processes. They are also frequently used in the healthcare sector. With this in mind over on this page you can get to know how tungsten cable is an ideal fit for surgical robots. Here are a couple of reasons why that is here to stay, and you should embrace such models today too.

The cost savings do not end there either.

Soldering components wrongly can lead to the destruction of the board/ panel being worked on. Wrong connections can also rule out an electrical component at the quality control section. This translates into more man-hours and wastage for the company.

However, a robotic soldering machine with high-tech helps avoid such wrong operations and improveprecisioneffortlessly to cut costs.

Soldering is not just heating wire components onto boards. There is a part of this science that involves the right supply of solder, the proper heat intensity, and precision of the solder joint.

While experienced humans can get that done sometimes, they cannot always keep it up all of the time. As time goes on, such a drop inconsistency will lead to differences in the quality of soldering operations done in the company.

While an automatic soldering robot is good at this. With the program set inside, it can repeat the same command to produce almost the same product each time, reducing differences of products.

If there is one part of soldiering that can be very tricky, it has to be the part that involves the use of alloys. Fortunately, solution providers like Topbest have come up with a soldiering robot that handle these otherwise problematic alloys with ease.

One such alloy is Nitinol, which is preferred in the manufacturing of high-precision items like catheters, stents, and other endoscopic instruments. With such sensitivity around what they are used for, it is just right that an automatic soldering robot is called into action to make sure no mistakes happen whatsoever. 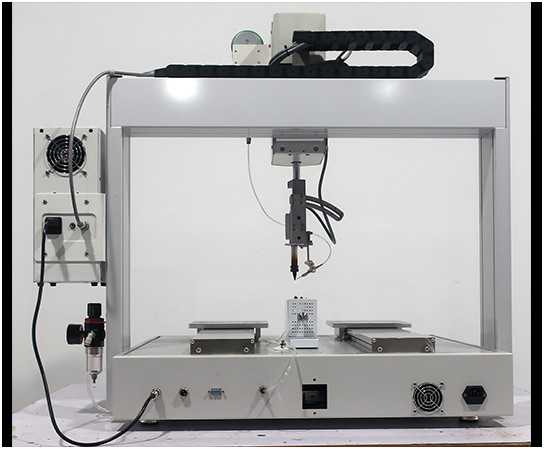 Precision manufacturing and advanced production standards are seeing OEMs go for much smaller parts than before. This means that the units to be manufactured still has to perform better than the last versions – but be smaller.

Here, there can easily be a problem if a robotic soldering machine is not used.

After all, it would not be very easy for anyone to accurately solder the needed wires and parts when such nano components are involved.

But automatic soldering robots can do it easily. It can be accurate to 0.1mm, so as to link these components in the scale of nano excellently, which is a difficult task even for a professional worker.

The automatic soldering robot is not just the new fad in the electronics and electrical industry. They have been developed to meet the unique needs of manufacturers.

Robotic soldering machines of Topbest contain all the advantages mentioned above, committing to satisfied customers who have to keep innovating and churning out multiple units of their products with a high level of consistency in that production process.

Without these robots, that would not be very easy. Now that they are here, you should also get in on them to make your processes seamless.