HomeTechnologyWhat Is The Difference Between Fiber And CO2 Laser Marking?
Technology

What Is The Difference Between Fiber And CO2 Laser Marking?

Laser technology has greatly influenced the manufacturing industries particularly in the field of engraving. Its extraordinary benefits like reduced downtime, convenient usage, and rapid action have compelled big industries to go for laser engraving machinery. Although this technology has numerous benefits, its usefulness may vary based on the type of material under treatment. 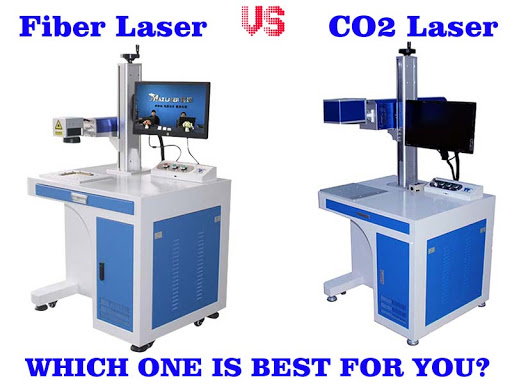 Therefore it is imperative to opt appropriate laser type that would be compatible with the material being used. The capability of a laser to penetrate a particular material can be determined by its wavelength. Fiber lasers and CO2 lasers are two kinds of lasers used in the technique of engraving,According to OTLASER laser machine manufacturer technology team,we will explain what are the difference between them:

What Are Fiber And CO2 Laser Engraving Machines?

Fiber lasers emit radiation of wavelength up to 1,060 nm thus making them better in every aspect than CO2 lasers. They are typically considered suitable for sharp contrast markings, for instance, metal tempering, etching, and engraving. Due to their ability to produce precise focal points they are considered a perfect choice for permanent engraving on metals. Usually, fiber lasers are used for marking serial numbers, barcodes, and even data matrices on heavy-duty materials. Moreover, they are even used by industries for removing rust, paint, and pollutants.

While on the contrary, the CO2 lasers are an ideal option for treating all kinds of non-metallic materials. Plastics, acrylic, textiles, wood, stone, and the rest, work well on exposure to CO2 laser technology. These lasers have numerous applications for instance they are widely in the packaging of pharmaceutical and other edible products. Moreover, construction materials, electronic devices, PVC pipes, circuit components are all marked through CO2 lasers. Unlike fiber lasers, CO2 results in a fast straight-line cut and finish of the material surface.

Although both types of laser technology possess remarkable traits they do contradict each other in numerous aspects. These differences are listed below;

The main working principle of fiber lasers is that they use a source of fiber lasers. It emits radiations of wavelength 1,060 nm. With high photoelectric efficiency, the consumption of electricity decreases greatly. This energy-saving laser machine can operate for up to 100,000 hours.

The CO2 lasers comprise a gas laser source that emits rays of wavelength 10,600 nm. The gas molecules emitted from the gas source incise the material surface upon incorporation.

Although the cost of the laser engraving equipment depends on the power consumption fiber lasers are somewhat expensive than CO2 lasers. In general,30W fiber laser marking machine typically start from $30,00 and can augment as high as $1000, 000. Laser machinery having power ranging from 20 watts to 6000 watts can be quite steep.