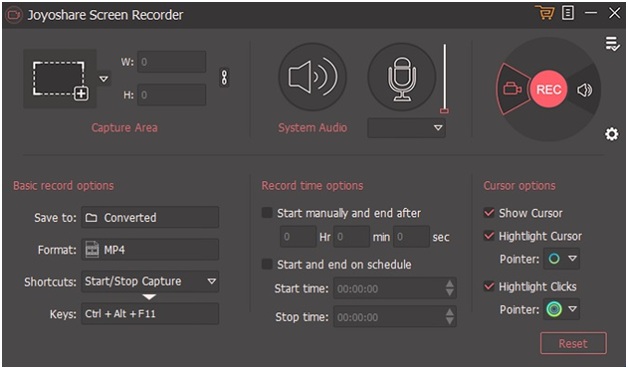 Joyoshare Screen Recorder for Windows is the ultimate screen capture tool that allows you to record anything that is on your screen as well as any audio that is being played over the speakers. It is a user-friendly and high-performance screen recorder that not only offers a lot of flexibility but also allows the user to easily share the recorded session in various file formats.

Record and save any screen content to any device

The biggest strength of Joyoshare Screen Recorder is thelarge number of audio and video formats it supports. Joyoshare Screen Recorder for Windows even supports lossless conversions so that no detail is lost from the recording. Besides lossless conversions, it also supports almost all common formats that you can play back on any device or upload to the web. The formats include MP4, AVI, MKV, MOV and other common formats. Joyoshare Screen Recorder also has a wide range of presets that allow you to quickly convert the videos depending on the target device. You can use presents to quickly convert videos to play on Android devices, Xbox, Smart TVs, Apple devices and so on. You can also convert the videos so that you can quickly send them as email attachments, upload to YouTube, Facebook, or other websites.

You can use Joyoshare Screen Recorder to simply record the audio that is being played on your PC. This means that you can record and share live podcasts to internet radio streams too. During the audio recording process, no part of the screen is recorded. With a built-in encoder, the recorded audio stream can also be encoded into common audio formats such as MP3, WMA or AAC. Lossless formats such as FLAC, ALAC and WAV are also supported so that you have high-quality audio files. Once the audio is captured, you can also modify audio ID3 tags that allows you to add metadata such as track number, title, artist name, album name and so on.

Joyoshare Screen Recorder toolprovides a lot of options when recording content on your screen. It can act as a game recording software, a screen recorder for YouTube, a presentation recorder, a full-screen software usage guide recorder and so on.

You can even record just the video or just the audio. You can even record the microphone input from your PC along with the system sounds. Joyoshare Screen Recorder also provides you with the option to record only a certain part of your screen when you are recording. You can use the built-in timer to start and stop the recording. Moreover, you can improve the cursor visibility by highlighting the cursor movements and clicks.

Joyoshare Screen Recorder is an excellent tool to record audio, video or both from your PC screen. It not only provides you with a wide range of recording tools but also provides you with the options to capture your recording in multiple formats and share them online or play them on multiple devices.