Facsimile Facts – The Mechanisms of Printing

I’m sure we’ve all sat down at one point or another and asked ourselves, “How do printers actually work?” The answer was much easier back in the days before electricity. The oldest printers were as simple as carving the raised mirror image of the desired text (or image) into woodblocks that were then manually inked and pressed down on sheets to copy the book. It only took a few years to hand-carve every woodblock for a single book.

Books may seem expensive now, but they’re far from a luxury item, and if they were priced according to the complexity of the technology used to print them, they might be priceless. 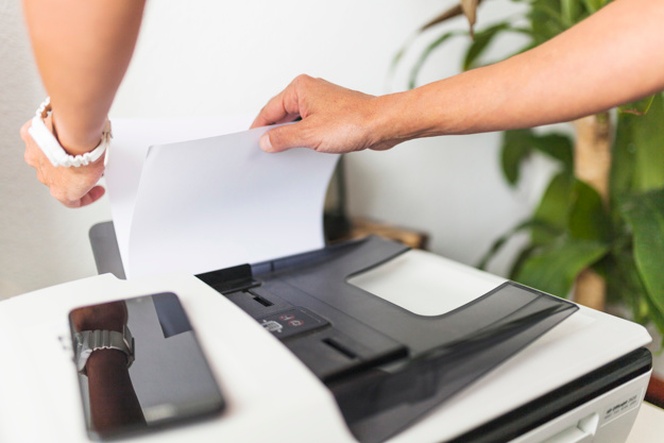 The basics of printers nowadays are easy enough to get a handle on – you put your printer cartridges in the printer, hit the print button, and the printer cartridge and printhead moves across the page, line by line, spitting out the right colour ink at the right location, until the page is finished. That’s the simplest explanation of inkjet printers, anyway. Laser printers are a bit different, and then there are 3D printers, screen printing, and the dramatically named Spirit Duplicator, as well as many others.

Gravure is the opposite of relief – engraved holes fill with ink, the surface is wiped clean, and thus when the paper is pressed down, only the ink-filled holes convey the print. While old typewriters used relief printing, and glossy magazines sometimes use gravure printing, for the type of every day printing we’re all familiar with, the mechanism is usually offset printing.

Offset printing adds an extra stop in the ink to plate to paper journey – a rolling rod between the plate and the paper, which picks up the ink as though the rod were the intended recipient. It basically uses the oil and water trick to get the ink to stick only where it’s supposed to. Oil and water don’t mix, and neither do the special inks and solvents. It then rolls to transfer the ink to the paper, comes up clean, and continues to pick up and put down ink in this manner until the print is done. It’s faster, cleaner, and it’s better for the lifetime of the plate too, since it doesn’t have to be repetitively pressed to paper, only to an intermediate roller.

Inkjet printers are the kind you’ll most often find in your homes. Equipped with printer cartridges and printheads, inkjets use a thermal reaction to shoot the right colour ink out of the printhead nozzle. The droplets are so small that they land exactly where they’re supposed to and don’t smudge. Even with all this going on, the entire process is still extremely rapid.

Inkjet printers are self-cleaning too, as if they weren’t already cool enough. Ink can dry up on a printhead nozzle if the printer isn’t used regularly, even though it’s self-capping with a rubber tip to avoid contact with air as much as possible. When clogged, the strategy the printer uses is a lot like the way a car cleans its windscreen. The printer will fire ink from all chambers to try to moisten and clear the dried ink, and won’t even leave a mess; a rubber wiper will automatically swipe the printhead nozzle to clear all of the ink.

Laser printers are a little different to inkjets, and they use a kind of offset mechanism. A laser is fired upon a roller, which leaves an electric charge, so when the charged toner powder – the laser printer version of inkjet printer cartridges – comes into contact with the charged drum, it transfers. Then it’s as simple as rolling paper through it to pick up the toner to get your print.

There’s so much more to printers than you can see from outside the casing. The inner workings are so complex that they’ve taken more than a thousand years to be developed to where they are now. It’s time to appreciate your printer for all the amazing work it does.