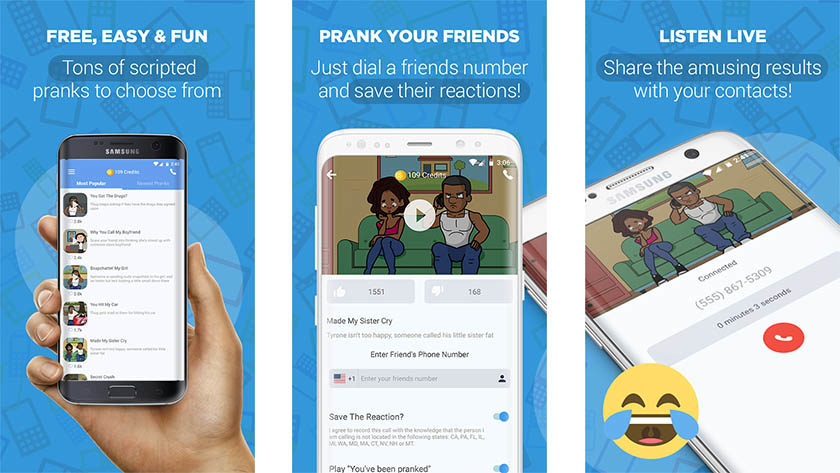 Prank calls are a good old fashioned way of getting much-needed payback on your friends. And since there is no face to face interaction, you can perform them anonymously at the convenience of your own home.

Created by the mischievous geniuses responsible for the hilarious Ownage Pranks youtube channel, this app offers over 100 prerecordings containing a variety of new and exciting prank scripts.

Each prank script has a unique prank scenario- An angry man calling you to stay away from his girlfriend or a neighbour insisting you give him your Wifi password.

The way an automated prerecording interacts with someone over a phone call is very impressive, simulating a real-live person. The app has an algorithm AI which achieves real-time analysis on the dialogue being said, giving the right instances to respond.

This app excels as each scenario is meticulously created to ensure pranks feel up to date and fresh. Delivery is also top-notch with its brilliant voice acting.

Recently newer prerecordings have offered users a selection of voice actors to perform the script, with each saying the prank script a certain way.

Another prescripted prank dial app that will make prank calling a more enjoyable experience is Prankster, like Ownage Pranks you will be able to select an automated prank script to fool your friends.

Prankster’s unique selection of prank scripts are versatile as pranks offered have been adapted to several languages, this is particularly good if you have foreign friends.

Every prank call is recorded afterwards and saved in “My calls”.

In this section of the app, you’ll be able to listen to all prank calls previously made and share recordings to other apps, i.e. Facebook Messenger, WhatsApp, Viber, Snapchat etc

Making a prank call also requires minimal effort, as shown by the steps below:

Step 1: Select a prerecording from the various available

Step 2: Enter the phone number and then tap call

Step 3: Tune in live and as calls are recorded listen to the recording afterwards.

Faking calling apps have established itself as a mainstay in the fun world of prank calls, but with so many fake call apps available to download are there any noticeable differences between them?

Fake Call and SMS is definitely among the most popular fake call apps today and for a good reason, although marketed as a fake incoming call app users will additionally be able to create incoming text messages.

Both features have many practical uses that can be applied in real-life situations but its most frequent use is to escape bad situations.

Let’s say you’ve attended a party but desperately want to go, in this case, use the app to schedule an instant incoming call. As no one will anticipate its a bogus call or SMS, you’ll be able to fabricate any excuse to leave while appearing genuine.

Boasting a high level of SMS customization you can personalize a fake contacts message content, name and phone number which is great for tricking friends.

If you want to create a prank on the spot, there are fake caller characters already included such as the police, girlfriend, boyfriend and pizza parlour.

Feeling bored at breaktime and want to prank your school friends into thinking you have a new girlfriend from class? This playful app lets anyone create an incoming phone call to themselves from a fake girlfriend character provided in the app.

To use, begin by choosing your faker caller from its gallery containing several fake girlfriend images. Afterwards, tap call now for a simulated phone call to contact your phone instantly.

During calls, you will be able to set a voice audio clip that will speak to you from the other side. Talking to someone (even if imaginary) will make conversations flow more naturally, adding more realism to the call.

Fake callers aren’t just limited to fake girlfriends however but to any contact you like, customize fake callers to your specifications by including a new name and phone number. By creating multiple fake characters, you’ll be able to create some elaborate prank scenarios.