Looking at the pace of the technological advancements in terms of autonomous cars, it can be predicted that the days to witness the driverless cars on roads are earlier than estimated. Introduction of autonomous vehicles on roads, no matter in which type they occur, will motivate certain governments to build a convenient infrastructure to fulfill the demands of those futuristic vehicles. 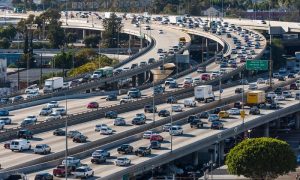 Looking forward, there is plan of building a proposed lane for autonomous vehicles that will not only go hand-in hand with the advanced technology but will also deliver a reliable traffic-dodging solution. A projected solution to transform the existing highways into reserved lanes that will be only for autonomous cars, buses, and trucks is the new concept known as Hyperlane. And to implement the same idea practically is the aim of the Anthony Barrs and Baiyu Chen, graduate students of UC Berkeley and co-founders of U.S. Hyperlane Company.

The Hyperlanes will be fully controlled by centralized control units and would permit the self-driving vehicles to vroom up to the speed of 160 kph. As per Chen, there will be a need to convert the present road infrastructures into smart roads, which will be probably used for parcel deliveries, autonomous buses, ridesharing services.

Barrs said that the concept was inspired by the high-speed rail in Japan, and it was rectified that it is complicated to do the similar stuff. While thinking about the rail tracks, it was realized that what if the tracks were removed and a smart road infrastructure is built for the upcoming technologies such as autonomous vehicles.

Motivated by the bullet train in Japan, the Hyperlane will engage autonomous cars via slip road or junction and control through a central computer and drive the vehicles towards its destination.

The person sitting in the car will just have to drive the autonomous vehicles towards the junction or station nearby your location and post entering into the station, the car will be switched into self-driving mode and then controlled through Hyperlane. Moreover, after that point, the car will be driven on its own and you can just check with your mails or even have a coffee.

This balance amid the present infrastructure in urban areas and development of new smart roads will help to conclude whether the Hyperlane is an efficient method of travel in future or can it reduce the congestion, for the travelers who are willing to pour some extra bucks for smooth travel.